May 2013 Observations - All the News That's Fit to Print


All the News That’s Fit to Print


In my month-before-last Observations (see “March 2013 Observations - Looking Back on the Future of Printing”), I wrote about a University of Southern California class project. A professor assigned his engineering students to analyze a group of 25-year-old predictions for the future, contained in a series of 1988 Los Angeles Times' Magazine articles. Among my own discoveries, I realized that one of the prognostications, about having news “pushed” to a home printer, might be more accurate than it was being given credit for. And I promised more detail, and rationale for this conclusion, to come in the following month’s Observations.

Well, Earth Day came along, which I had overlooked in my promise, and to which I almost always dedicate a column. (See this year’s “April 2013 Observations - Please consider the environment..."). So here I am in May catching up with that overdue commitment.

I have previously mentioned the HP Industry Analyst Summit in early March of this year, held in Boston, which I attended along with several hundred other "influencers" who cover HP across its extremely broad spectrum of business activity. It was my first opportunity to witness the recently combined PC and Printing groups presenting as one, and I came away very impressed. (And the company continues to impress, with Q2 earnings and future outlook exceeding expectations – see “HP Printer Metrics – Latest quarterlyview” – and HPQ stock hitting 52-week highs.)

One of the main points during one of the print-specific presentations, this one by Steve Nigro (one of two HP execs who have functionally replaced the long-time-but-now-retired printer chief Vyomesh Joshi, with the other being Pradeep Jotwani) was the investment HP is making in new business models for selling supplies to consumers and small businesses, and CEO Meg Whitman emphasized this again in her remarks as part of the May 22ndearnings call, calling out specifically the “Instant Ink” and “Ink Advantage” programs. And what was seen as driving the demand for the ink which is part of the program? Nigro stated that among them, is the growing popularity of printing via the company’s “Scheduled Delivery” service. Scheduled Delivery is compatible with HP’s web-connected printers and was introduced three years ago (and harkens back to “Instant Delivery”, a service HP brought to market in the late 1990s – see August 2007’s “The More Things Change…”). Its continued growth leads Nigro to predict, that with the volume of news and other content being printed, “One day in the future we will be the largest deliverer of content into homes outside of the US Postal service.” In terms of number of subscribers, follow-up with an HP spokesperson led to the additional insight that, “Today [the number of] our scheduled delivery subscribers equal about the average US newspaper subscription.”

So with the “TimesDigest” from the New York Times leading the way, I couldn’t help but make the connection with the “All the News That’s Fit to Print” motto. And while that may be a great example of a warning sign indicating “Marketing Myopia” - where the actual mission of the Times organization should really fundamentally not include “printing” but rather “gathering, synthesizing and distributing” of the news as its core competency - HP is still, at least more or less, about marks on paper. Thus it was good to see so much focus on printing and imaging at the summit (and in Whitman's remarks this month), including the Officejet Pro X for the office, along with new Laser MFPs, and all the continued progress in the Graphics Arts/Commercial spaces.

So back to the two articles I mentioned in March. As described in that post, “An article on the professor’s process is described in an LA Times piece by Bob Pool, and a follow-up story, “2013, as Imagined by Futurists in 1988,” by Zak Stone, which appears on Fast Company’s co.existhttp://www.fastcoexist.com/ Web site” covered the conclusion that the prediction for 2013, in a hypothetical consumer home, each morning a “laser-jet [sic] printer would automatically print off a feed of news stories most interesting to them” was off base. But was it? At least in some of those “Scheduled Delivery” homes it is apparently not off base!

“There is plenty of material out there about the future—what we thought it would be and are now living, and what really will follow in the next years and decades. It is fascinating stuff, especially for those of us in the printing and imaging industry.”


And once again, that is proving very true, especially about the "plenty of material." Just this week, I was delighted to find the Geekwire piece (also featured by AllThingsD Voices) by Frank Catalano that also goes back to some 1983 predictions, specifically about the future of news. In “The future of news, as viewed from 1993: What we got right, and very wrong”, Catalano begins with “I recently undertook an archaeological dig (others call it “cleaning out files”) and came across a remarkable artifact of the pre-web days: a physical printout of a spirited debate on the future of the news media from CompuServe’s JForum (a.k.a. Journalism Forum) — dated May, 1993.”

This absolutely resonated with me! I was a Compuserve user in May 1993, looking at the future of print, which gives me common ground right there. But the real confluence was with Catalano’s “dig” reference, and my very first Observations column (now going back seven-and-a-half years, to December 2005), where I reflected on my “Hard Copy Time Capsule” found while cleaning out my HP cubicle.

Catalano’s work is far too interesting to jam into the wrap up here, so I will be returning to it in a future post. I won’t promise “next month”, having learned my lesson, but stay tuned!

HP pleased its shareholders and the markets generally last Thursday, with a jump in share price based on improved results and outlook. The increase in price, to nearly $25 at the close, was both a 52-week high as well as the biggest single day's gain since 2001, as reported by Marketwatch in "HP Rally - Turnaround or Sugar High?" by Ben Pimentel, recalling a notable day in HP history.


The last time H-P’s stock rose by that much was on Nov. 6, 2001 after the family of co-founder Bill Hewlett, led by then director Walter Hewlett, came out against a proposed merger with Compaq Computer. H-P, then led by Carly Fiorina, acquired Compaq the following year.

But what about printers?

Remember last time ("What a difference - or not - seven years makes") and I went behind the numbers for further perspective? One of my findings involved the "sine wave" of printing revenues and their year-to-year compares, finding only four alternative (plus/minus) stages since 2006. With the small, but still in-the-red -1% quarterly revenue growth (decline), that's eight quarters in a row of negative compares, but eyeballing the curve, anyway, predicts a Q3 breakthrough to the black. We'll see!

And here's our updated spreadsheet with the data.

Gen Y - Turning from Cars and Cash, and Print too?

I am in the middle of teaching one of my favorite classes, Product Design and Development. My students are typically post-MBA candidates who are taking this normally as their final course as part of a marketing specialty), and I enjoy taking them through classic topics around marketing research, strategy, and implementing the 4Ps. I also share some of my hands-on experiences recalled from my years in this area. And of course, current examples of products and services under development or recently launched provide great discussion fodder as well.

One opportunity this time through has been some recent discussion in the media on "Generation Y" or Millennial trends and preferences, and the potential impact/opportunity for marketers. We have had some great discussions on both changes in driving habits (cars and driving just are not as popular as they were with previous generations, it seems), and in paying habits (cash getting less and less popular as medium of choice).

Like with my students, these changes come as no surprise to me. Of course, I not a directly part of Generation Y (born between the early 1980 to the early 2000s), but are related to quite a few! And as we look at evidence of plummeting popularity of print and hard copy, maybe it should come as no surprise, given these other major generational changes.
Posted by Jim Lyons at 6:06 AM No comments:

A couple of items pertaining to Apple's iPad caught my attention over the past 24 hours, and both remind me, in different ways, how time and technology march on, mostly for the better! 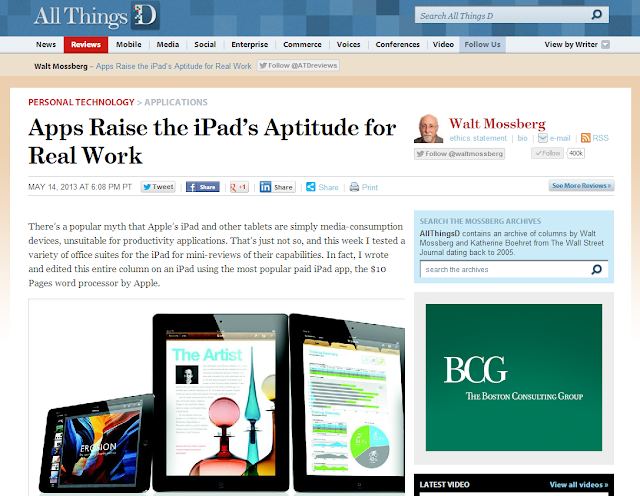 Walt Mossberg of Wall Street Journal and All Things Digital reminds us, in "Apps Raise the iPad's Aptitude for Real Work", that the iPad can be a powerful "creation" and not just "consumption" device, with the right productivity apps. (Mossberg doesn't use the "creation" word - that's mine - but instead takes a brief run at defining productivity.) He looks at a variety in this great summary, which he produced via an iPad and Apple's Pages $10 word processor, recently identified as the best-selling paid iPad app in history.

The next piece is a little more frivolous but does speak to the iPad's growing ubiquity. In "iPads Invade the Bathroom", Marketwatch's Charles Passy takes a look at a new iPad accessory to enhance its readability in a very specific location of the house. 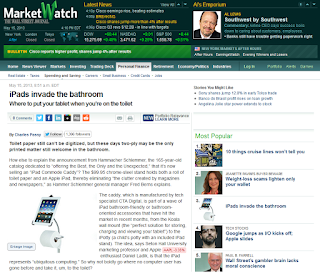 Without going on more (see Passy's article if interested), his opening, "Toilet paper still can't be digitized..." did take me back to a very vivid memory from my relatively early days in the printing and imaging industry. Back in the 1980s and early 1990s, numerous predictions of the looming "the paperless office" caused a smug backlash among those of us in the business of print. One of the common come-backs offered by those looking to minimize the threat of those paperless-workplace prognosticators went along the lines of, "That will happen about the same time we see the paperless bathroom!"

Enough of this, for now, but it does remind one to never say never!
Posted by Jim Lyons at 1:43 PM 1 comment:

Here's a fun one! I am honored by being included in the "50 Marketing Leaders Over 50 You Should Know" list, as compiled earlier this year by Alan See, and featured in the May issue of Global CMO - The Magazine.

Alan describes how he came up with the idea for the list as follows:

"Let’s recognize that age has little to do with ability. You’re never too young or too old if you’ve got talent. In the marketing world, Advertising Age and Direct Marketing News have their 40 under 40 lists. Forbes has their 30 under 30. This blog post counterbalances with 50 who are over 50 because to my knowledge a list of this nature has never been published."


So as I just as I read in Marketwatch, economic shifts in the dining-out business have a dearth of younger customers, with boomers and retirees keeping restaurants alive. Thus, I am proposing a dinner out on the town to celebrate my place on the list!

And for interested readers, I would be pleased if you took a look!
Posted by Jim Lyons at 1:03 PM No comments: 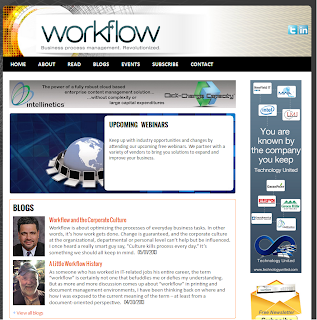 I am thrilled to be part of the launch (as of yesterday, May 1) of the new Workflow website from 1105 Media's Office Technology Group. The confluence of imaging and printing, document management, business process automation, and the like has been a fascinating area to watch, and I am looking forward to contributing insights and observations to the magazine and website in the coming months and years, as I have for this initial rollout (see A Little Workflow History). Follow them on twitter as well @WorkflowOTG.