With some of the year's biggest (and my favorite) TV events coming up, I find myself curious about the dates - and the memory of some old benchmarks I once counted on. Is the calendar compressing? Like most things, it depends on who you ask (or more accurately, where you look).

First, the Super Bowl? I remember watching just about all the games, way back to the very first one (Packers won, of course) and even the fourth - with the Chiefs extending the AFL's winning streak to two. It started as an afternoon game in early January, but the date began to slip. It's now (seemingly) firmly lodged in early February.

And the Oscars? I remember one night in the early '80s being at a gathering for young adults on a Spring evening (Monday), when the NCAA men's basketball finals and the Academy Awards were conflicting, on the same night! That would have been in late March.

In 2020, the two of the biggest TV nights in America are ONE WEEK apart. The NFL will be helping us celebrate Ground Hog's Day this year, with kickoff at 6:30pm EST on February 2nd. The Oscars will air the following week in the same time slot. (Evening of February 9th.)

So I arbitrarily went back 25 years, and did a Google search for the dates of the 1995 game and ceremony. And I am feeling I can trust my memory! That year, the big game was played on January 29th. And the Academy Awards that year? Still in the late March timeframe I remembered. 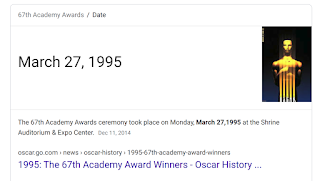 In conclusion, it's the film awards that have moved, the most anyway. In both cases, trophies are awarded based (mostly) on achievements in the prior year, so getting the ceremony closer to year in question seems sensible. I will be watching both - and yes, paying attention to the commercials as well.
Posted by Jim Lyons at 6:49 AM No comments:

The River of Doubt: Theodore Roosevelt's Darkest Journey by Candice Millard
My rating: 5 of 5 stars

I had never heard of Teddy Roosevelt's post-presidential expedition to the Amazon rainforest in Brazil until the recently-aired Ken Burns series ("The Roosevelts"). The perilous nature of the trip intrigued me and so when I saw this book, authored by a National Geographic reporter Candice Miller, I knew I had to read it. And I am happy that I did - even if it took what must be a year or more to finish (thanks to our public library for seemingly endless renewals).

View all my reviews
Posted by Jim Lyons at 6:23 AM No comments:

Language evolves...caught in the act!

As a student of evolution as used in its traditional sense, I am also intrigued by the concept's application to processes outside the biological. (See #s 1 and 2 in the screenshot above.)

First during the just-ended holiday season, and now with a recent Amazon order, I have noted that what I have always referred to as "cables" (see below) - or what many refer to as "cords" - are now being called "chargers".


It's a great adaptation, to a more "active" noun that describes the function they perform, but my more traditional self would complain that the charger is the part that "plugs in the wall", i.e. the 110v wall socket (in the US anyway). My #OKBoomer rationale is that it's does the charging and the cable only provides the connection with the device being charged. HOWEVER, the plugging in the wall these days means into the ever-more-ubiquitous USB sockets found included in modern wall outlets, and things like lamps in hotel rooms and backs of airplane seats.