August Observations: End of Summer 2011—Getting Those Memories Organized via Photobooks

[August 18, 2011] Like me, you may be hard pressed to believe that we are getting near the end of another glorious summer. Hopefully though, at least for many of us, now is also the time to look back on some great memories and perhaps do something about making those memories—many captured in digital pictures—a little more tangible and long lasting.

For most of us from the analog age, a myriad of photos inhabit drawers and shoe boxes with those photo-processor-provided envelopes full of prints and negatives, while a few more disciplined folks have put together photo albums to organize those memories. Now in the digital photo age, hard drives and cloud-based storage services have replaced those desk drawers and shoeboxes, with computer file folders rather than envelopes now containing the photos. (And then there are some of us who have combined both worlds and ended up with two disorganized morasses: the digital files and the physical renditions of at least the “best of” those digital prints.) Perhaps this urge to organize and “albumize” is the season-ending equivalent of a New Year’s resolution, as in “I must organize my pictures” in place of “I must get in shape/lose weight/quit smoking.”

The good news? That minority who actually take action to turn those organizational desires into reality and actually create the books will find that today’s many popular photobook vendors promise the opportunity to do so fast and easily, for a price, of course. As an interested user, dedicated digital shutterbug, and occasional procrastinator, I pushed myself to take the chance to try out three different solutions from three well-known vendors as a paying customer, and in this column, I will share some of my results.

First, though, a little industry perspective. Although not quite the “hot new thing” in the overall printing and imaging industry, photobooks and their kin have certainly risen to the top of photo-printing discussions during the last few years. As the number of basic 4 × 6-inch photo prints has declined, whether through home printing or other means, photobooks (and their proportionately higher revenues and profit margins) have been seen as somewhat of a savior for at least some segments of the photo business. For example, at the Lyra Symposium this past January, Steve Hoffenberg, director of Consumer Imaging Research (CII) and senior analyst for Lyra Research, summarized this hot product category, noting that photobooks are a booming market, with more than 50 million photobooks produced in 2010, a figure that is expected to grow to more than 90 million by 2014 (see “2011 Lyra Imaging Symposium: The Gloom of the Recession is Replaced by Excitement Over Cloud Printing, Commercial Ink Jet, MPS, and More”). So photobooks are big business and definitely worth my participation and observations.

Not quite by design, I ended up with three photobook projects recently, and beyond two summer-vacation-photo efforts, the third one deserves at least an asterisk as a bound book of my first five-and-a-half years of Observations columns. This project, while developed via the same process and with a similar price, is the exception to the other two that contain the more typical pretty photos and captions. All three projects were created from relatively long-established companies in the industry.

From Blurb, I designed a book comprised of a collection of cool photos to commemorate a summer visit to the home city of my sister and brother-in-law, and the one-of-a-kind classic car exhibit where my brother-in-law was chief docent. The book turned out great, despite “low resolution” warnings during the final pre-order stages. Assuming he is not a regular reader of this column (no worries), brother-in-law Dan will be pleasantly surprised come holiday time when he unwraps this photobook with all its memories of vintage cars, his passion. 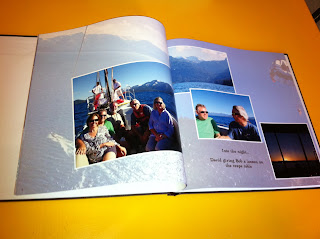 Next from Shutterfly, my wife and I collaborated from afar with another couple who had converged with us at the resort-area home of a third long-time acquaintance in a reunion of graduate school friends who go back decades. Our host, seemingly the “man who has everything,” is a big collector of coffee table books, so the choice to thank him with a personalized commemorative book from the memory-filled weekend seemed like the perfect choice as a token of our appreciation for his hospitality. Additional copies made nice keepsakes for us and the other couple, too. The book, indeed, was the perfect thank-you gift, as it turned out.

Lastly from SharedBook, my urge to commemorate my first five years of Observations columns (published by Lyra Research as part of The Hard Copy Observer and in my blog) lent itself to that vendor’s blog-friendly format in terms of ease of production. Admittedly a “vanity” project, this effort satisfied my desire to answer the question, “Wouldn’t it be fun to see all my Observations columns in a book?” Like many of you out there, I am a long-time “wannabe” book author, and it was a revelation to realize that I have written enough column material to make up several books, so why not create one? SharedBook made the project easy and relatively inexpensive, and having a book of my work lying around the office cannot be all bad for creating an impression on prospective consulting clients.

Actually while the excitement involved with each of the three projects would lead one to believe this is “early adopter” stuff that usually gets me going, in many ways this process is old hat. I originally covered Blurb’s launch from the Demo conference in 2006 (click here), and SharedBook followed them in early 2007 (click here). Shutterfly has been around much longer.

As a marketing professor (and student), I should examine what led to my brand choices. My selections, handily spread out over three suppliers, were driven by a variety of factors.

A great offer from Blurb became available via Groupon
SharedBook has effective e-mail offers, and one that I received (for something like 15 percent off and/or free shipping) caught my attention after my collection of Observations had hit what I considered critical mass (five plus years). Shutterfly was our friends’ choice—they had the lead on the book creative—as the service with which they were familiar. (In our family’s case, that choice probably would have gone to Snapfish, again based on tradition.) And Blurb? They participated in an enticing Groupon offer that I snapped up and banked earlier in the year, knowing I would want to do a photobook of one sort or another soon enough.

All the books are very satisfactory, as is the pleasure gained from putting together your own photobooks, and I recommend the services that produced them. While pricing is hard to compare, one firm does not seem to have a particular edge (though look for frequent “deals” and other offers from all of them), and quality and service levels, including communications and speed of fulfillment, seem quite good in all cases. These projects were not my first photobooks, and while I cannot see myself making a regular habit out of creating them, these three will not be my last.

One final observation as I thought about the photo content in these books, compared to past efforts: virtually all the photos, even in the collaborative one, were taken with a standard iPhone 4 camera. I would hate to be in the standalone digital still camera business these days! And my next project—getting back to that early adopter thing? I am quite intrigued by the newly emerging Instagram photo books!
Posted by Jim Lyons at 7:05 AM No comments: