Revisiting Splitsville – it’s a good thing
During the waning days of September, we are now just a month away from the split of Hewlett Packard ($HPQ) into a Printer and PC Company (HP Inc.) and an equally-sized business, revenue-wise, HP Enterprise, with servers, software and services making up its lines of business. Reports are that the behind-the-scenes efforts to cleave the $100 Billion company into two have been proceeding with “military-like precision”, as CEO Meg Whitman likes to say. As the official day of separation day draws near, at least one financial talking head suggests the move making a $100 Billion behemoth into two $50 Billion behemoths as merely backwards-looking “financial engineering”, with little real innovation taking place these days at the firm which started Silicon Valley way back in 1939. (See Jim Chanos’s charges and Whitman’s defense in this CNBC video.) So what do I think? I am growing in my enthusiasm, especially as I look back at all the positive connotations the word “split” has had for HP during its history.

Reminiscing about the positive nature of splits in the HP culture
I wrote about the announced plan to split a year ago in a guest post at Actionable Intelligence (see “It’s Splitsville in Palo Alto”, ). While the use of the term, “Splitsville”, was intended to be taken in a light-hearted way, I found the characterization of the split as a “divorce” by some other industry analysts as heavy-handed and overly negative, while I remained fairly neutral in my views on the split. Now, as the day gets closer, I have been turning more positive, overall. I think it comes partly from having to do with HP’s story under the microscope lately due to contention over the true history behind the firing of a current-day presidential primary candidate, and the stimulus that has offered to think back to what “split” signified in culture of the “HP Way”, while I was employed there at least (from 1981 to 2005). So as the split-date nears, I am much more inclined to think the cleavage is the right thing to do.

Going back to my first days at HP, I learned quickly from my co-workers at Boise’s Disc Memory Division in 1981, two of the most revered concepts had to do with “splits”. One was the stock split, which regularly followed an also-regular runup in the company’s common stock. It was considered a nearly dead-certain occurrence following year-in, year-out growth and profits. With a generous stock-purchase incentive program, this made everyone happy!
The other very positive outcome associated with the term “split” was the “division split” – the seemingly naturally occurring dividing of a successful business (a “division” in HP parlance) once its growth had taken it to a certain level of revenue, $100 Million being the ballpark number in the 1980s. (The LaserJet division, it should be noted, grew to over $1 Billion by the early 1990s, before its cleavage into Network, Business and Personal divisions.) The division split was the ultimate acknowledgement of success – viewed as a payoff to all involved in the growth of the original unit, and resulted in more management opportunities and professional growth.

Writing a book…or at least reading one 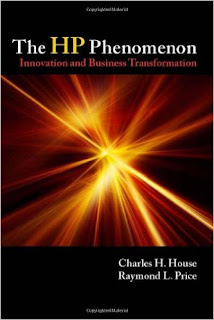 A few weeks after the year-ago announcement, I penned my October Observations, musing that it might be time for me to undertake a modern history of HP in the form of a book. (See "The Other Shoe..."). Inspired by author Eric Larson and full of thoughts about all the big picture meanings of the announced split, I mused that there might be a book project “in there somewhere”. But while that ambition lies fallow, I did go back to a fairly current (through 2010) volume on HP's history, the admirable The HP Phenomenon by Chuck House and Raymond Price. (I referenced the work previously in this blog, in my tribute to Ray Smelek in the post, “How Boise, Idaho Became a Printer Capital”.)

In that text, I found the word “split” mentioned 11 times. It was almost always used in terms of growth and innovation. And speaking of innovation, the late Lew Platt offered his wisdom, transcribed from a speech, and included by House and Price as Appendix D, and titled “Managing Innovation: An Oxymoron?” (As a reminder, Platt was the last of the “home grown” HP CEOs, replaced by the first in a series of relatively short-lived outsiders in 1999.) His comments about innovation bristle with the “HP Way” wisdom of keeping things lean and mean, and breaking things up whenever stagnation started to set in. (His replacement made her stab at success based on what might be argued an opposite aggregation strategy.) Splitting a business, an R&D lab, a marketing department – these all fit with the wisdom of Platt and even go along with his somewhat whimsical title referring to the oxymoron of management of what some would consider an unmanageable process, beyond providing the right environment.

The Printer Group – innovating like always, even better?
So will a “leaner meaner” HP Inc. and HP Enterprise offer more innovation and in turn more shareholder value, overcoming the "conglomerate discount", in the words of current CEO Whitman? To me the early resuts, even ahead of the formal split, give a strong indication the answer is “yes”. Of my most recent blog posts, I have penned three about examples what I consider some of the most customer-oriented innovations in the printer industry that I have seen in a long time. Two of those three were from HP, and cover both the consumer market and the enterprise market. (See “More inkjet customer focus - HP eliminates anxiety" and "HP Printer Group Keeps Minding Customer Needs with new LaserJets for the Enterprise".) And it's interesting to note that the “Enterprise” example will remain with the printers and PC’s in HP Inc., after October 31st. This led me to asking HP a few specific things about some of the alignment details post-split. I will save those questions (and answers) for a (near) future post.

My July Observations were dedicated to a Graham Nash concert I had seen over the summer (see "CSNY and Printing"), and the connections that Nash has to high-quality fine-arts printing pioneered by a company he helped form in the 1990s, Nash Editions.

Since my post from a couple of months ago, when I promised more about the story in a future Observations, some great news! Starting on October 17, the Rock and Roll Hall of Fame in Cleveland will feature a Graham Nash exhibit. "Graham Nash: Touching the Flame" will feature, according to the Hall's website:


Pieces from Nash's heroes and inspirations – the Beatles, the Everly Brothers, Elvis Presley, the Beach Boys, Buddy Holly and Duane Allman – and treasures from his time with the Hollies and Crosby, Stills and Nash come to life as Nash reflects on the visceral and profound impact of the music and world events on him and those around him.

See more - and for now, I imagine my newly made friends at Nash Exhibits are mighty busy getting the show ready, so I will wish them the best and start working on arraninging my trip to Cleveland! 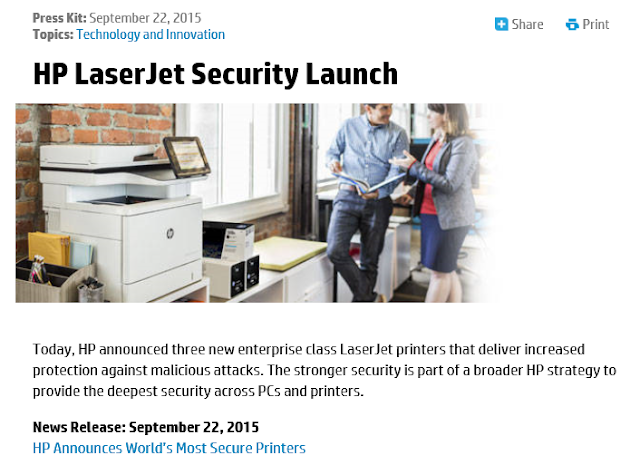 
Today’s product launch by HP is impressive as the company’s printer group continues with their sharp customer focus. This carries over from the Instant Ink announcement I covered early this month (see “More inkjet customer focus – HP eliminates anxiety"
In the LaserJet/Security case, rather than the end-user, their customer is the IT manager and product specifier. These individuals, as HP and their research characterize them, are ever more concerned about the security of their networks and the nodes on those networks - which include many Enterprise-grade printers and MFPs. HP hired Ponemon Institute to survey more than 2,000 IT security practitioners in North America, EMEA, Asia-Pac and Latin America to help guide their development and launch of the new security solutions, which are also backwards compatible with devices manufactured by HP as long ago as 2011.

For a great story with more details on the solution, I highly recommend "The Best New Defense in Cyber-Security can be found on - Printers", by Arthur Q. Choi in Popular Science.
Included with HP’s launch of three new enterprise class LaserJet printers today are what the company refers to as “built-in self-healing security features with protection down to the BIOS”.  And while this quote (from the sub-head of the press release) seems a little jargon-heavy, reading down the press release a couple of lines, we find these much more customer-friendly statements (attributed to Tuan Tran, HP’s vice president and general manager, LaserJet and Enterprise Solutions business), “Protecting against security breaches is one of the biggest challenges our customers face…HP is helping customers secure their devices, documents and data by defending our enterprise printers with the strongest protection in the industry.”  (My bolds.)
During my long involvement with the tech industry, particularly from the hardware side, it is always challenging to move the internal interest in product development and launch from centering on the latest in terms of “speeds and feeds” – i.e. new hardware features – to solutions and meaningful customer benefits. With this announcement from HP, and others that have recently impressed me (and to be fair, other industry incumbents like Epson – see "Epson's New SuperTank Printers aim at customer pain points"), the printing and imaging industry is showing a great deal of customer focus and savvy.
Posted by Jim Lyons at 8:34 AM No comments:

After yesterday's monthly Observations post on Epson and their focus on relieving customer pain points with their August Ecotank printer/MFP launch, it's only fair to point out HP's similar approach highlighted today. Their release from this morning on expanding their successful Instant Ink program touts "eliminating ink anxiety" their customers might have, with the program which I have featured in my Observations in the past (e.g. see "Printers as things? Do Printers fit as part of the Internet-of-things" where I observe the Instant Ink program, expanded today, fits with the IoT model.)
Posted by Jim Lyons at 6:38 AM No comments: