It's Splitsville in Rochester 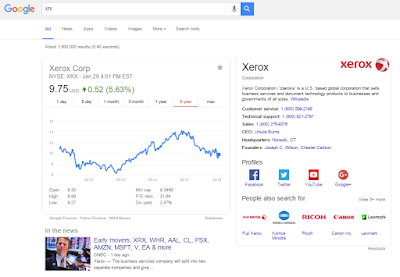 For the second time in a little over a year, one of the kingpins of the imaging and printing business has announced it is splitting into two companies. Unlike HP's separation announced in October 2014 and enacted on November 1, 2015  (see "It's Splitsville in Palo Alto"), I must admit I offer little insight into the Carl Icahn-inspired split announced by Xerox (XRX), now described as the "business services company".  In numerous stories, the company whose name became synonymous with office copiers is now referred to by its long-intended direction of "services first", but that does not change the fact that their legacy hardware business has been deemed "too different" and needs to be a separate entity (of course, the HP split was a little harder to describe in a simple phrase like "hardware and everything else").
Posted by Jim Lyons at 5:06 AM No comments: 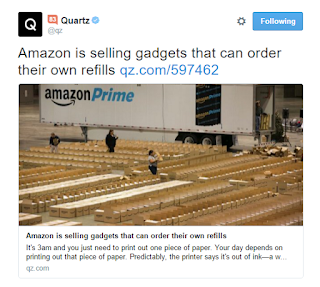 During mid-January this year, my attention was captured by a Quartz article titled “Amazon is selling gadgets that can order their own refills”. The story, written by Mike Murphy, and dated January 19, 2016, the same day as Amazon’s official announcement, features a use case based on a printer owner running out of ink at 3am, when a desperate need arises to print a single page from the printer. This situation which would have been avoided had the hapless user had a Brother printer registered in the Amazon Dash Replenishment program, meaning the printer would have pre-emptively taken on the job of ordering supplies soon to be in need of replacement, leading to a happy ending with that much-needed page pleasingly printed.
The Amazon Dash Replenishment Service builds on their Dash Button program, launched about a year ago and featuring product categories like cleaning supplies and sports drinks. Amazon has upped the level of automation and added supplies-consuming machines like printers, automated pet feeders, and household appliances like washing machines and coffee makers, which are Internet-connected and “smart enough” to do the ordering “by themselves”.

And despite the focus on Brother in the release and some of the accompanying press, including a Fortune article that leads with a printer from Brother, Samsung is also shown as a member of the program, with their laser printers, and with open API’s (see release), one can expect more to follow. 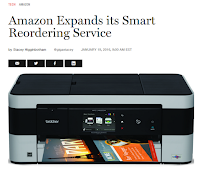 I got a strong feeling of déjà vu from this story, and the more I thought about it, it was actually multiple cases of feeling “we’ve been here before”. One instance linked in my mind to the “drone discussion” on 60 Minutes and an appearance by Amazon CEO and founder Jeff Bezos near this time two years ago, which immediately resulted in tons of press (and speculation by some in the printing and imaging industry that ink cartridges might be an ideal drone-delivery candidate – talk about desperate to get a page printed!). Amazon Drones arise as a topic to this day (with the company occasionally feeding the flames), proving the real value of it, in my mind, was in its PR value, or what we call in the marketing field “earned media”. I made to comparison then – and being near the Super Bowl, calendar-wise – to the Apple “1984” commercial. Both stories were seemingly irresistible for both the business and general press. Amazon’s Dash Button last year (a bit reminiscent of the Easy Button from Staples) and now the Auto-replenishment angle also hit it big with that broader base of media, going far beyond the tech world – though considerably less sexy and futuristic than the drones. (It turns out the Quartz coverage that first drew my attention was the tip of the iceberg.) Brother printers also enjoyed a share of the lead (lede?) in many pieces – for example, Fortune’s (see screenshot above).

A much more chronologically distant association but one I remember quite well, came from my time working for HP and leading a team looking at the newly emerging Internet, going back 20 years and more, when one of the first ideas to come out of brainstorming on the possible benefits of the Internet on printers was that we could someday have networked-connected printers which could sense supply capacities and then order their own!  And in fact, I included this memory in my almost two-year-old coverage of HP’s Instant Ink program, (see "April Observations - Printers as things? Do printers fit as part of the Internet-of-things?") where I also ran with the idea that their automated ink-fulfillment program was something of a “proof point” for the Internet of Things – a somewhat loftier subject (if not more practical and potentially profitable) than Amazon’s ever-improving logistics system.

I wanted to get another industry person’s view on the practicality of all this from Amazon, with some comparison to other programs, so I pinged friend and well-known industry observer Larry Jamieson. Jamieson and I go way back, to a relationship first being defined with me on the vendor (HP) side and he on the analyst side at BIS/CAP and then Lyra Research. Later, we became colleagues when I joined Lyra followed by both eventually moving to Photizo Group when Lyra was acquired. Recently we had been corresponding on other matters, so I threw Amazon Dash Replenishment into the mix. Here’s how he sizes it up, leading with a surprise, to me at least, that he is a current HP Instant Ink customer.

“I got Instant Ink because I really did know how much I printed and how much replacement cartridges are. While many consumers complain about the cost and frequency of purchase of ink cartridges, it isn't that critical in their lives. Printers are not high on the list of important items in their lives, especially with electronic documents becoming more commonplace. For consumers and small businesses to buy into these programs, they must reach a new level of trust with the provider. It's one thing to buy a printer and cartridges on a periodic basis, but to share information and allow the supplier to track usage is pretty open.

The other factor is that the suppliers may tell consumers that the automatic replenishment system will save them money and aggravation (from running out of ink at inopportune times, but the consumers essentially have to do the math to figure out that this service really does provide them benefits and isn't just a plan to extract more money from consumers' pockets.

I don't know much about the Amazon system. Can it be used to replenish with third party cartridges or refills? In HP's case, it essentially locks the consumers in to HP cartridges, but at a cost that is close to third party providers. Why would people buy third party ink or toner if there is very little price difference and consumers are getting OEM reliability? With the Amazon solution, other than getting timely delivery, are there cost benefits for the cartridge costs?

In both HP and Amazon's cases, the biggest problem is getting the consumers' attention. Right now, consumers need to look specifically for these solutions to buy in, and with printing generally on the decline, it might be an uphill battle.”

Jamieson’s question on brand-name versus alternative supplies is a good one, with price-sensitivity and supplies an ever-growing consumer concern. (And yes, that previous subject heading is a bit of a play on words!) So it looks like an invitation to an upcoming follow-up post with a perspective directly from HP. And to throw in a question (really an area of questions) of my own, and speaking of consumers, the Amazon is an end-user play at least at its beginning, but how are small businesses and even enterprises envisioned to play in the same or similar programs? Much of the value proposition of both Amazon and HP programs can be traced to a more automated, hands-off approach brought into the mix by Managed Print Services, working its way down-market. How will these new activities work their way up-market?

As readers might know I have recently been enamored with Google Photos. It seems like a great place to be my central digital photo repository, and its search capabilities are quite amazing.

Over the holidays I came up with a game to be played with grandchildren - following entering "Pet" as a search term, we took turns declaring whether a given photo depicted something that really was a pet. We found there is quite a bit of ambiguity in that term - see screen shot example above. Cats are clearly pets, wild birds (no matter how poor the photo) are not, but what about plastic flamingos?

And I must admit, the idea was inspired, at least a bit, by the legendary Late Show with David Letterman sketch, "Is This Anything?".
Posted by Jim Lyons at 9:08 AM No comments: