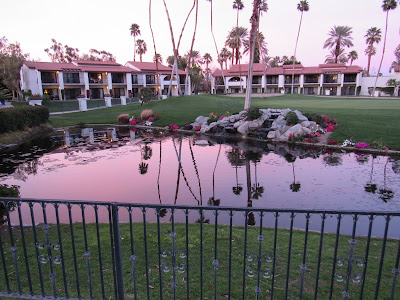 Earlier this month, I enjoyed a week of pure leisure in the Coachella Valley of California, home to Palm Springs, Palm Desert, and Rancho Mirage, among other towns and cities. On the calendar, my February visit was a few weeks after the period when the now-defunct Lyra Research Imaging Symposium typically had its mid- to late-January run, but a late-afternoon swing by Rancho Las Palmas - home to every one of the annual conferences held from 1998 to 2012 - resulted in my feeling a bit haunted by the many great friends and memories over nearly two decades' worth of conferences.

The Symposium met its demise as a result of industry consolidation - which continues three years later. In its case, it was the 2012 acquisition of Lyra Research by the Photizo Group, (similar to how we saw Buyers Laboratory take over Infotrends in 2015. With Photizo’s already-established calendar of industry events, the Symposium logically ended its run. One year after the final symposium, in 2013, I penned a post I titled “Rancho Mirage Is Calling My Name - Memories of the Lyra Imaging Symposium”. Looking at that post three years later, I see a wish on my part to be transported into that sunny and warm climate as opposed to continuing through the month of January with my hometown’s bitter weather. But I also, based on my memories then, was able to recount some of my memories of past Symposia (not bad on the plural, huh?), both during my attendance as a representative of HP, as well as later stints as an independent contributor to Lyra publications, and then as Senior Editor for Lyra and, briefly, Photizo. Reading through the post was a fun trip down memory lane, as the saying goes, and satisfied my “haunting” for the most part. (I will leave interested readers to read that post for some of the industry highlights I recalled then, rather than re-state them here.)

Going to the dogs?
Pardon the sub-head (I couldn’t resist), but one other point worth noting about the trip - for me at least - came from a “site visit” during my week-long stay. My traveling party and I stopped in to Rancho Las Palmas itself on a late Thursday afternoon during our week in the valley. In addition to enjoying a look and brief stroll around the beautiful grounds/golf course just as sunset was approaching, I witnessed a novel sight, at least for me - the resort's “Yappy Hour". To get the idea, think of combining happy hour and dogs. For $10, dog owners get two drinks, their pooch gets treats, and they all get to mingle with other dog owners and their pets. Everyone in attendance, human and canine, while I observed anyway, seemed to be well-behaved and enjoying themselves, and there was actually very little yapping!

As a professor of marketing now going on ten years, I am always interested in examples of target marketing and segmentation. And Yappy Hour is a good one, with what my favorite marketing text would refer to as the targeting of an affinity group of “dog lovers” - and in our case, something a little more narrowed down, to “dog lovers looking to meet other dog lovers”. (The local newspaper, The Desert Sun, profiled the once-a-month event in December 2014 and brought out this person-to-person feature.)

This marketing example took me back to one a now ten-years-ago visit to the Symposium. It was early in my “second career”, when I had left employment in the corporate world and was making it on my own as an independent blogger/analyst. Since I was on my own dime, I was price-shopping for places to stay, and found suitable lodging at an older place back Route 111, all the way to the outskirts of Palm Springs proper. It was economical and perfectly suitable as a place to stay (though I burned some gas, as well as miles on the rental car, going back and forth to Rancho Mirage), but I did NOT take advantage of one of the property’s leading features, and its billing as a “pet friendly” motel. This was new to me then, a lodging establishment geared to that previously mentioned dog-lover affinity group, and in this case fine-tuned to “dog lovers traveling by car to/through Palm Springs”. (Now that I have thought of it a little more, I think it might be better characterized as a reference group, by the way.)

That was ten years ago. Between “Yappy Hour” and all the dogs, and dog owners, I encountered while traveling, it seems the group is both growing and being more widely recognized by marketers as a group to be catered to beyond just the obvious pet food, supplies, grooming and veterinarian services. A dog on an airplane is hardly anything to notice these days - and hopefully not notice! I am not a member of the dog-loving affinity (or reference) group but I can appreciate market segmentation and great target marketing!

While I used the term “haunted”, in the end I have nothing but fondness for the area and the resort. And even though no other printing and imaging industry members were around, outside of a few ghosts, Rancho Las Palmas remains a beautiful spot. With “Yappy Hour” the management is clearly forging ahead into new marketing territory!