October Observations: Neuromarketing and Paper—Bringing Together the New and the Old

The Hard Copy Observer, October 2010
Observations: Neuromarketing and Paper—Bringing Together the New and the Old

by Jim Lyons
[October 25, 2010] As readers of this column will recognize, I am drawn to new and different techniques and methodologies. This attraction has been true throughout my career in marketing printer products and is also true in my other passion of late, teaching marketing and economics to graduates and undergraduates at The University of Phoenix. This propensity for exploring the “new and exciting” (to me, anyway) has led me, in the realm of my printing industry interests, to looking at new computing platforms and information appliances, such as today’s mobile devices, and projecting their impact on the role of paper and printing. In the latter, the academic environment, I have enjoyed learning as much as I can about the related fields of behavioral economics and neuromarketing during these last few years. 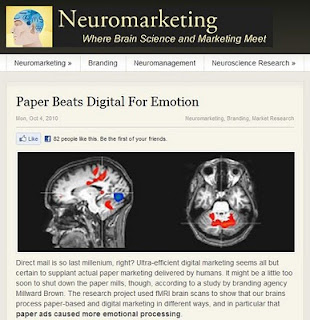 So I was very happy indeed when not long ago, I was led by a Twitter link (another passion) to a post at the Neuromarketing—Where Brain Science and Marketing Meet blog, titled, “Paper Beats Digital for Emotion,” that perfectly captured the confluence of my previously stated interests. As gathered by the short name of the blog in question, neuromarketing is the study of the human brain's reaction to various marketing-related questions that have traditionally been the quest of conventional marketing research, like surveys and focus groups. By using brain science and tools such as functional magnetic resonance imaging (fMRI) machines, marketers are beginning to probe beneath the surface of the conscious mind, with the goal of understanding consumers better, either in analyzing reactions to advertising and promotional messages (and in this case, the medium itself) or to the products’ and services’ attributes (for those familiar with the Four P’s, the “promotion” and the “product”). The premise behind neuromarketing is that while in many purchase decisions, consumers cannot really describe why they act the way they do, their reasons may be evident if brain reactions are measured. 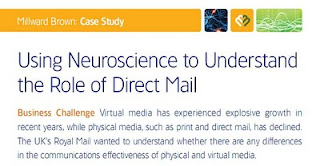 In the blog post in question, neuromarketing expert Roger Dooley writes about a study by branding agency MillwardBrown, conducted for the UK’s Royal Mail, which reviewed measurements of consumer reactions with an fMRI machine, and concluded that paper-based direct-mail had a stronger emotional impact on respondents than digital advertising. To quote from Dooley’s post (which in turn quotes from the original study), “The research project used fMRI brain scans to show that our brains process paper-based and digital marketing in different ways, and in particular, that paper ads caused more emotional processing. According to the study, physical media left a ‘deeper footprint’ in the brain, even after for controlling for the increase in sensory processing for tangible items.”
Much of Dooley's post goes on to defend the importance of digital advertising, highlighting many of its capabilities for interactivity, for example, which are beyond the realm of paper. However, the study clearly makes the point that our attachment to paper, whether photos, office documents, or books and magazines, is linked to an indescribable but very real response to items that are tangible, familiar, and comfortable.
The Nuts and Bolts of  Neuromarketing
Neuromarketing is relatively new, as the average age of the majority of work regarding the subject (and its academic cousin, neuroeconomics) is at most a few years old. The “industry standard” college marketing textbook, Marketing Management by Philip Kotler and Kevin Lane Keller, omits any mention of the term “neuromarketing” in its 12th edition (copyright 2006), but by its 13th edition (copyright 2009), the authors have included a pull-out box titled, “Marketing Insight—Understanding Brain Science,” in the chapter on conducting marketing research and forecasting demand. (Remember last month’s column on the textbook business, where we reported on frequent edition rollovers viewed by some as value-destroying profitability schemes? In this case anyway, I am pleased to see real value in a new edition!) 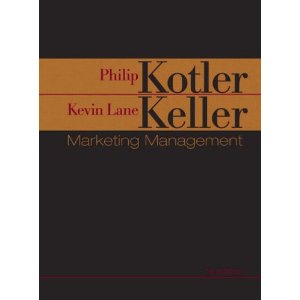 To quote the authoritative text (13th edition), “As an alternative to traditional consumer research, some researchers have begun to develop sophisticated techniques from neuroscience that monitor brain activity to better gauge consumer responses to marketing stimuli...The term neuromarketing has been used to describe brain research on the effect of marketing stimuli. By adding neurological techniques to their research arsenal, marketers are trying to move toward a more complete picture of what goes on inside consumers’ heads.”
In addition to the typical caveats on the cost of conducting the research (as expected, quite high given the need to measure brain waves on one respondent at a time via an fMRI, which was done in the MillwardBrown case, as mentioned), Kotler and Keller point out caveats around complexity and ethics concerns. “Given the complexity of the human brain, however, many researchers caution that neurological research should not form the sole basis for marketing decisions. These research activities have not been universally applauded though. Critics think that such a development will only lead to more marketing manipulation by companies.”
Using the power of neuromarketing, and its measurement and interpretation of the brain’s reactions, in combination with traditional research methods may be the key to understanding our subconscious and emotional reactions to paper, and attitudes about printed material. Kotler and Keller summarize (more generally), “One major finding to emerge from neurological consumer research is that many purchase decisions are characterized less by the logical weighing of variables than was previously assumed and more [quoting a recent study] ‘as a largely unconscious habitual process, as distinct from the rational, conscious, information processing model of economists and traditional marketing textbooks.’ Even basic decisions, such as the purchase of gasoline, are influenced by brain activity at the subrational level.”

The future of paper is certainly a complex story and has yet to unfold (pardon the pun). But techniques related to neuromarketing, focusing on the subconscious and other deep-rooted consumer preferences and decision-making, certainly offer intriguing possibilities that can help predict when and where paper and print will survive and prosper. The Royal Mail case offers one such example and is an indication of further work that needs to be done.
Posted by Jim Lyons at 6:46 AM No comments: