Two of my famous economics professors - Thaler and Navarro

Through my years involving higher education, both student and teacher, I have encountered a number of memorable educators. Two of my economics professors have come to prominence in the past six months or so, and their similarities and differences are worthy of a few "compare and contrast" notes. 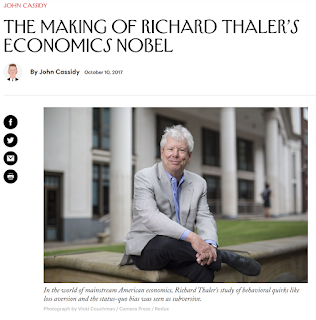 In the Fall, it was announced that the year's (only) Nobel Prize winner in Economics was the behavioral economist Richard Thaler. He was my Microeconomics professor during my first semester of my MBA program, at Cornell's Johnson School of Business. I had followed his career, which found him ending up at the Economic mecca University of Chicago, and in my teaching the past dozen years, I have used a range of Thaler's examples going all the way back to Cornell and his "sunk cost fallacy" - lessons which never left me - as well as his more recent work, which includes the well-known book Nudge, co-authored with Cass Sunstein, who served in the Obama administration from 2009 to 2012. 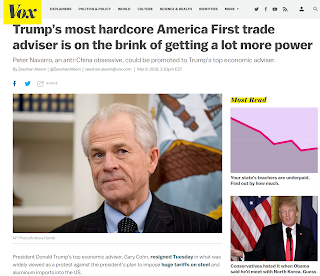 Fast-forwarding a few decades, but back to me on the student side, Peter Navarro was my instructor for several courses, including refreshers in Micro- and Macroeconomics, just in the last several years. The educational forum where I studied under Navarro was, appropriate in keeping with the times, Coursera, the Palo Alto-based start-up that has helped pioneer Massive Open Online Courses, i.e. MOOCs. Navarro's courses were fast-paced, to the point, and among the earliest offered. I was only marginally aware of Navarro's reputation as a China-phobic trade protectionist, something that has become newsworthy in the past few weeks, and as he is considered for the nation's top Economic Advisor job.

Was my experience different, with the live, in-class encounters with Thaler, versus the online video experience with Navarro. Of course, in many ways, but the economists are different enough, and memorable enough by themselves to make the learning format only one of the variables. I enjoyed my time with both, learned a lot, and while I may not always agree, at least I have had the opportunity to hear and ponder their views.
Posted by Jim Lyons at 8:25 PM No comments: