also published in The Hard Copy Observer, July 2011
[July 29, 2011] In these days of seemingly ever-growing and changing social media platforms and behaviors, with micro-second attention spans and the attempt (demand?) to say everything that needs to be said in 140 characters, where does that leave the old-as-time oral tradition, and what about good old-fashioned, around-the-campfire-style storytelling?

This question has long interested me, especially the contrast between the impact of today’s technology on human communication and deep-in-the-DNA human nature. And I have lots of company, with a surge of interest in storytelling throughout the country inspired by such favorites as Public Radio International’s This American Life, hosted by Ira Glass and heard on many NPR stations, and the New York-based The Moth story-telling group and its corresponding live events and podcast/radio show. I personally have become involved locally with a Boise-based group that hosts monthly “performances” (Story, Story Night) and workshops (Story, Story Studio), and from the look of things, these types of activities are sprouting up in communities all over the country.

While much of the interest in stories is universal in nature (with themes about such matters as love, life, and loss), the important role of storytelling in business has not been lost. Many advertisements attempt to “tell a story,” for example, and strong company cultures are often reinforced by in-house storytellers. We can all recognize that the printer industry has many memorable stories, which prompted me to explore some of the fundamentals behind what makes a story great, and then take a look at a few tales that come to mind as among the greatest printer stories ever told.

Peter Guber, of business fame, has authored a book, published earlier this year, Tell to Win: Connect, Persuade, and Triumph with the Hidden Power of Story, which is a much-expanded version of his Harvard Business Review article, “The Four Truths of the Story Teller”. (By the way, one of my favorite professorial pieces of advice these days? In a case like this, start with the article. If you end up wanting more, there’s always the book, but six pages—rather than 200 or more—might just be enough. And more and more, I suggest looking for the TED video first.).

Guber’s article puts forth four “truths” that a good business story must satisfy: truth to the teller, truth to the audience, truth to the moment, and truth to the mission. He also offers insight into the strong correlation between leadership and storytelling and the importance of humility in the role of the storyteller. In addition, Guber hits on that paradox that intrigues me so much: the contrast between ancient storytelling customs and modern communications, especially social media. From HBR, December 2007, page 59:

“Technological breakthroughs—movable type, movies, radio, television, the Internet—have provided new ways of recording, presenting, and disseminating stories. But it isn’t special effects or the 0’s and 1’s of the digital revolution that matter most—it’s the ooh’s and aah’s that the storyteller evokes from an audience. State-of-the-art technology is a great tool for capturing and transmitting words, images, and ideas, but the power of storytelling resides most fundamentally in ‘state-of-the-heart’ technology.”

With this premise, Facebook, Google+, Twitter, and the rest are seemingly just new ways to tell old stories.

While my research was very helpful in understanding what makes a great story as told by an individual and perhaps how I can seek to master or at least improve my personal storytelling, my quest to identify great industry stories goes beyond individual storytellers to the legacies left by some of our most dramatic game-changers. One can see that Guber’s “truths” about what we collectively believe as far as the role of our business—past, present, and future—apply to each of the three stories I offer. Left to the individual, each can be embellished and honed to fit his or her audience, but let me throw three basic ideas out there for my greatest industry stories. 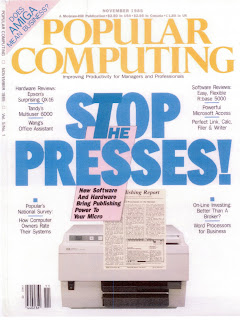 Mid-1980’s – Introduction of Desktop Laser Printers and The Birth of Desktop Publishing. One can argue that these innovative printers from the likes of Apple, Canon, and HP (and the fascinating tale of “coop-etition” among these vendors), along with the supporting cast of computers, operating systems, and applications, changed the face of printing and publishing, and information dissemination, forever and brought “killer app” success to graphical user interfaces (GUIs) on Macintosh and Windows computers that are so pervasive today I can hardly remember when they were new and novel.

1990’s – Upstart IBM Spinoff in Kentucky Becomes Lexmark, Challenges Industry Dominance by HP. Having celebrated the 20th anniversary of its original (and IBM-originated) 4019 LaserPrinter in October 2009, Lexmark continues to be an industry stalwart years after the company’s exit from IBM and eventual “declaration of independence” under the Lexmark name. The firm, like so many others, has had its ups and downs, but Lexmark’s challenge to industry-leader HP is ongoing…and the stuff of legends.

2000’s –Ink Jet Printers from Out-of-Nowhere, Memjet Threatens to Put Mega-Billion Industry on Its Head. The stir in the industry caused by Memjet’s dramatic entry onto the printing stage in 2007 has to be among the industry’s greatest stories. Lyra’s own Charles LeCompte made the case. “I’ve been following this industry for 20 years, and I’ve never seen anything of this scale: 10 times faster, 20 times cheaper, all at once.” LeCompte was quoted by PC Magazine (see above) and similarly in many other articles. After fits-and-starts associated with “the last mile” of commercialization, Memjet printers—first of the industrial variety and more recently home-and-office oriented—have just begun shipping in the last year, and their disruptive potential remains an open question.

So, readers, what do you think? Is one of the three stories I have included here the greatest in the history of our business, or do you have one of your own? Please comment below, or better yet tweet with your ideas. And keep telling those stories!