This month, I had the chance to visit and follow up with a new 3D Printing business in my local area, Intermountain 3D, owned and operated by long-time friends and fellow HP alums Lynn and Brian Hoffmann. And I want to again share a little of what I have been learning recently about the nascent business of 3D printing, aka “additive manufacturing,” with this month’s version made possible via great insights from the Hoffmanns.

And OK - if you read my January Observations you know I am in the middle of what I believe to be a long-overdue sabbatical, which includes — in part — taking myself off the hook for a monthly “Observations” post. But part of a sabbatical is having time to explore and learn about different areas of interest, and yes, for me at least, that means making and sharing observations!

My explorations in this case includes getting a bit closer to the hands-on side of 3D printing, as opposed to my normal higher-level business strategy approach (for example, see my recent review of HP’s history in the 3D printing market). This month I continued by visiting with a pair of long-time HP colleagues who are a husband-and-wife team bringing many years of experience in engineering, marketing, and general management.

Brian Hoffmann, serving as the new company’s president, is an HP R&D and engineering veteran who left the company a couple of years ago. Lynn Hoffmann, Intermountain 3D’s CEO, has experience concentrated more on marketing and general management; like Brian (and me), mostly in the printing and imaging world. Their new business started at the end of 2014 is focused on serving the greater Boise market as both a 3D printing service bureau as well as sales representatives for current world market leader 3D Systems (ticker symbol DDD).


As far as market focus, the Hoffmanns believe their most lucrative market will be manufacturing prototyping and concept modeling, rather than educational or hobbyist interests. Along these lines, one of their first moves, along with the alliance with 3D Systems, is forming a partnership with the local university (Boise State) and their “TechHelp” organization, a branch of BSU that owns equipment and has been providing limited 3D printing services; e.g., prototyping parts for product concepts and the like, for several years. (And the site of a very earlier field trip for me, now over two years ago, when I was even more clueless about the whole 3D printing world.)

With equipment sales opportunities spanning not only Idaho but also Wyoming and Montana, they are understandably excited about the challenge and opportunity. In comparing their startup firm, Intermountain 3D, to others around the country, they know that their portfolio of skills and experience is a strong asset. They note that other peer companies that market the DDD product line are, in many cases, existing firms that either have specialized in other machine tools and basic prototyping and low-volume, specialized manufacturing, or are familiar design and drafting companies who see 3D printing as an extension of their capabilities.

“3D printing is not really printing,” but …

A visit to their business in recent weeks proved both impressive and instructive. As we have so often heard from printing industry veterans, “3D printing is not REALLY printing,” but there are commonalities I am fascinated by, and the Hoffmanns agree. Noting their long tenure in HP’s printing business, Lynn began by recalling their certification process with 3D Systems. As their trainer described the familiar basics of the 3D printing market, including technologies that are laser-based and inkjet-based, they began to feel themselves on fairly familiar ground.

When asked about what experiences from HP have come in most handy in their first half-year of business, former HP Vice President Lynn Hoffmann responds, “Working in a high-tech market for a long time, pioneering with a leading-edge tech a la LaserJet [and its early days in the late 80s and 90s], we recognize customers who are as intrigued by the technology in use sometimes as much as the intended task.” Noting her experience primarily with the business-to-business side of HP printing, Intermountain 3D’s focus on industrial and commercial applications is also a good fit. In fact, the “consumer” side of 3D printing, with the Makerbots of the world (marketed by DDD’s competitor Stratasys http://www.stratasys.com/) seems to Lynn to be a better fit with the “3D printing” moniker, with “additive manufacturing” a better but less widely used label for the industrial/commercial applications of primary interest to the Hoffmanns. As Lynn explains the long-term potential in this space compared to a certain amount of “fad” appeal for the more consumer-oriented applications, she asks rhetorically, “How many plastic giraffes do you really have to make?”

As far as getting them started down this road, I asked “What got your attention about 3D printing in the first place?” Lynn responded, “Brian had been watching 3D printing for a long time from his vantage point as part of the HP R&D/Engineering organization. It’s interesting that 2D printing and 3D printing were really invented at the same time, but due to many factors, we’re seeing one nearing the end of its life cycle, with the other really just getting going.” As they looked as part of post-HP “second careers,” they pondered working together and buying an existing manufacturing business, maybe a fairly large one and realized, as Lynn says, “the first thing we do in upgrading the business, we realized the next machine we’re going to buy is a 3D printer, so why don’t we get ahead of this and be on the selling end of 3D printing?”

Any big surprises so far?

Those HP backgrounds, for the most part, are of great utility so far. Working mostly on the back-end of market and product strategy, design, and fairly high-level planning, even with a current product line, is quite a contrast to working squarely on the front-end, says Lynn, in the ultimate “feet on the ground” marketing and sales role. And while the concept of selling has always been important, actually making it happen brings its own challenges.

Brian Hoffmann’s background in engineering and emphasis for many of his HP years on higher-end printing and imaging systems, including commercial printing, leaves him with an excellent understanding of everything going on under the hood of the various 3D printing machines. He explains the relevance of “understanding all the technology telling the printer how to operate via software, embedded firmware and the like, the end-to-end workflow process, whether it’s 2D printing or 3D printing, it’s much the same logic and language.” But being a reseller, as opposed to being part of the engineering effort back at the factory makes a difference. “Knowing how it works and in some cases, how it may not work optimally, now means knowing the work-around and working with customers on that, rather than being part of the team who is upstream and can make direct changes to the product.”

And what about HP in 3D Printing?

And as fellow HP alums and HP-watchers, I had to ask about HP’s 3D printing presence. My question was: “As an authorized reseller of 3D Systems equipment you [Intermountain 3D] are clearly aligned with the current market leader in the space. But what about HP, whose presence was made official with its late 2014 announcements [see links] and whose shadow certainly looms over the category, waiting for some proof points when they first start to ship products. Do you have any thoughts about your potential alignment for/against HP?”

Lynn Hoffmann replied, “Due to timing, we were not tempted to wait for them, and we even started our business before they officially announced. Even following the announcement, we knew it would be awhile. They are focused on faster, higher resolution solutions and, knowing HP can put a superior product, especially in the filament end of the market, and they are saying they have a new technology.” She adds, in reference our shared experiences during those early LaserJet years, “It comes down to ‘Quick, Quiet, Quality’ - just like the good old days! With HP entering a market, introducing it to the world, can really broaden the market.”

Bringing to mind the “Welcome IBM, Seriously” message from Steve Jobs at the time of the original IBM PC launch, she concludes, “The history is there, and us being involved could be an interesting play. We like that it’s a homegrown technology, and not an acquisition. We are encouraged by this.” Spoken by a true old-school HPer, and I should know!!!

Best wishes and thanks to Brian and Lynn Hoffmann, and for those readers in the local Boise area, Intermountain 3D is having a grand opening open house on March 12. And the local Boise newspaper, The Idaho Statesman, did a nice basic write-up (see "Printing in Three Directions" ) on the Hoffmanns and their business in between my visit and press time for this post. 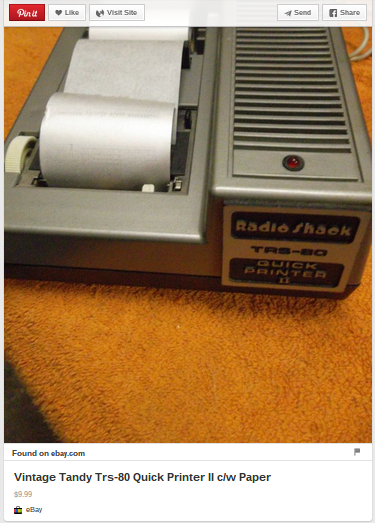 This week, there has been an interesting outpouring of nostalgia regarding the final days of Radio Shack. One of my favorites is by David Pierce in Wired, How RadioShack Helped Build Silicon Valley.

Obviously Radio Shack has, among other proponents, lots of baby boomers who can track their relationships with the stores (and catalog) to their childhoods. There are also younger aficionados (lots of memories these days of "learning to program on Dad's TRS-80" and the like), and I can remember my own original TRS-80's final days (after having survived two cross-country moves), when my curious youngest son, during his childhood, "took it apart to see what's inside" - with permission I might add. I believe my very first "personal printer", the QuickPrinter II (see above for example) to go along with that first personal PC, met a less memorable end.

(I add the modifier "personal" to distinguish between the computer and printer I had at work, a very early "microcomputer" called the Sol Helios and green-bar-paper printer whose manufacturer escapes me. These were supplied by the Byte Shop in downtown Portland, but we are getting into a whole other story with this.)

For more Radio Shack, Tandy, and "Trash-80" memories, there are some amazing websites out there, and a great Wikipedia article on the TRS-80 I recommend as a starting point.