December Observations: Mopria Alliance Update and The Case for Standards 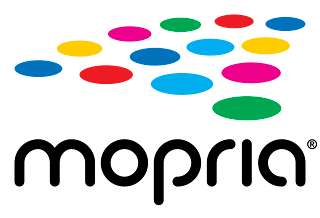 As we wrap up the year, it seemed timely to check in with the Mopria Alliance, formed in 2013 to promote standards for printing from mobile devices and representing a major landmark in our industry. As I noted at the time of its founding, the alliance was truly unique in bringing together, in the beginning, four industry-leading OEMs who would more typically be slugging it out in the marketplace (Canon, HP, Samsung and Xerox) and since then gone on to gain the support of virtually every printer vendor on Earth. Some of the numbers attained in just over three years are impressive – the alliance now has 25 companies as members, with 16 brands (OEMs) with printers certified, and more than 1,000 models.

As someone who cut his teeth in tech on industry rivalries going back to Macintosh versus Windows and the “PDL wars” between Adobe Postscript and HP PCL, I find my attention in the mobile printing space shifts to the (assumed on my part) rivalry between iOS and Android, and differences there, and the perception (again, mine) that Mopria is all about Android. In addition to offering the following guest post, HP Fellow and VP LaserJet Chief Technologist Phil McCoog, Phil McCoog, one of the key founders of the Mopria alliance, offered perspective. He notes that much Apple’s mobile printing solution shares underlying technologies with Mopria, a fact that can be tracked to the long-term work of the famed cross-industry “Printer Working Group” (PWG). Many of the same parties involved in Mopria today had been cooperating on developing standards in that group for 10 years or more, with Apple representatives chairing the committee during much of that time. So while “fierce rivalries” remain among all the participants in the market and in head-to-head product face-offs, the standards work removes significant cases of the players being “bogged down by unvaluable innovation,” in the words of McCoog.

What follows are more of McCoog's thoughts on standards and their importance for imaging and printing, in the form of a guest post, which I am very honored to include as part of my first “Observations” in its second decade. 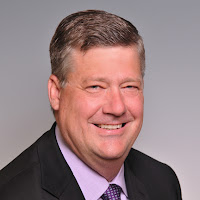 “The Case for Standards” Blog Post
By Phillip McCoog

HP Fellow and VP LaserJet Chief Technologist, and a founding leader for the Mopria Alliance
How frustrating was it when you bought that new cell phone, and then had to buy a whole new set of chargers? Or when your new computer uses an operating system version that you’re not used to? It seems like every time you buy a new printer or scanner, there are whole new batches of software downloads required.

Whether it’s a new cell phone or a new coffee maker, we’re all always learning to use a new “thing.” It’s time intensive and, frankly, annoying. And, with more and more internet connected products – Gartner is predicting that the Internet of Things install base will grow to 26 billion units by 2020[1] – these learning curves are only getting greater.

The thing is – product inconsistencies we face each day as consumers could have been solved if, at the right time, the right people had decided to do something about it. How? Through the creation and adoption of an industry standard.

At the most basic level, industry standards can be defined as generally accepted requirements outlined and followed by the members of an industry. Industry standards allow us to connect to the internet, ensure our computers and phones can interact with one another despite their brand, and make sure that – no matter if your TV is made by Samsung or LG – it can still receive and interpret broadcast signals so that you can watch your favorite show at night.

Take the example of the bar code, which is today ubiquitously used to encode product and personal data. In the early 1970s supermarkets saw the benefits of easily identifying and checking stock, and developed electronic tracking systems. But only when a common standard was developed did the barcode take off. Today the barcode is no longer only used by supermarkets; it appears on mobile phones, access cards, airline boarding passes and much more.  The common standard was able to focus creativity to generate new and unexpected applications that add value.

Another great example of industry standards done right is the MP3 file. The development of the MP3 allowed music to break free of physical recording devices like CDs and allowed for the development of an entirely new (and consumer-friendly) distribution process for music, and the invention of new technology such as the iPod, ringtones, computer game soundtracks, online radio podcasts and more.

However, creating an industry standard is a tricky business, and when done too soon (or even worse, too late) they often fail. As stated by the World Standards Cooperation, “Developing the right standards at the right time becomes increasingly difficult…In the case of technologies that require that different components to come together to connect, exchange information efficiently and provide a unified set of services, it is important that standardization happens early.  However, when standardization happens too early, it may impede the innovation process.”[2] When the industry has failed to develop standards on its own, sometimes regulators step in – something that would have been made unnecessary by the success of a voluntarily standard.

For example, a 2009 regulatory action by the European Commission resulted in the specification of a common external power supply (EPS), otherwise known as a charger, for use with data-enabled mobile phones sold in the European Union. Although compliance is voluntary, a majority of the world's largest mobile phone manufacturers have been compelled to make their applicable mobile phones compatible with Europe's common External Power Supply, making everyone’s lives easier.

Another possible outcome of a lack of an early industry standard is intense competition between similar technologies. This process is referred to as a “standards war.” Some well-known examples include VHS vs. Betamax, Explorer vs. Netscape, HD DVD vs. Blu-ray, and the list could go on.

We’ve all felt the pain caused by a lack of standards. New technologies should improve and simplify our lives – not cause additional headaches. The Internet of Things (IoT) for example is one of the next hurdles in technology development that require different manufacturers products and components to work together to connect and exchange information efficiently. For example, companies like Nest are developing internet connected thermostats & smoke detectors for the home that can be controlled via an application on your smart mobile. Currently, this process is great for consumers, as they only have a small number of devices to control. But as the industry grows, and more and more Internet-enabled products are developed, this will change.

Without a set industry standard to tie all of these devices together seamlessly – regardless of brand – users could end up with 100 separate apps to control the 100 different Internet-connected devices in their home. I think we can all agree that is not a sustainable model, and would not encourage consumer adoption or collective industry innovation. There are already several start-ups, big companies and consortiums creating IoT standards with the intention of solving this problem.  The unintended consequence may be yet another standards war.

By contrast, the printing industry is in alignment on standards for mobile printing.  Being able to print from your mobile device to a printer at home and at work is an example of a customer experience that is being simplified with the adoption of standards.  The Mopria Alliance is making it seamless to connect to any certified printer, regardless of brand.

Industry standards benefit everyone – driving efficiency, adoption and – ultimately – industry-wide innovation. Consider how much easier our lives would be if mobile device manufacturers had decided to make a standard charger at the beginning of the mobile age. Let’s push all industries to embrace opportunities to create a more intuitive world.

The "reusable paper" vision - is it finally here? 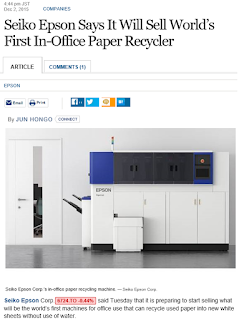 It was over 20 years ago that a future-looking strategy team at HP, one that I had the pleasure of leading, came up with some "wild cards" that could disrupt the printing and imaging industry (I don't think we were using the "d-word" back then, but found something similar to describe the idea). These one-off's went along with the team's more obvious trend analysis, seeing paper use diminishing over time, with electronic distribution of information growing exponentially into the future. More trendspotting showed device prices following an ongoing downtrend in price/performance.

But the idea of wild cards was attempting to identify events not on a continuum, that may or may not come to pass, and one of those was "reusable paper". This news from the Asian Wall Street Journal indicates that may have arrived, or will by next year when Seiko Epson indicates it will begin taking orders for the PaperLab. With dimensions of "2.6 meters (8.5 ft) in width, 1.8 meters in height and 1.2 meters in depth," according to the @wsjasia and reporter Jun Hongo (@junhungo@wsj), the machine is clearly not home-office ready.