For some time, I have been pointed towards this column as one of significance, and not exactly because it represents a “round” number. My November 2013 Observations is Number 96 in my series of monthly posts which began in December, 2005, just after I had left 25 years in the employment of Hewlett Packard, most of those in the imaging and printing business, and most of those associated directly with the LaserJet product line.

And in re-thinking the round-numbered-ness of eight years (as opposed to the more obvious ten), perhaps it’s a change in my thinking, and seeing the beauty and symmetry of two-to-the-third power (the first and second of the prime numbers after all) signified by eight years. My recent and I might add successful completion of Stanford Math Professor Keith Devlin’s “MOOC” (Massively Open Online Course) no doubt has something of an impact. You might recognize Dr. Devlin as the “Math Guy” on NPR’s Weekend Edition, my first encounter with him, but his “Introduction to Mathematical Thinking”, taken through Coursera.com, is a great online course that exercised my mind and truly gave me new perspectives on logic and language.

In that original Observations, I played off my final days at HP and discovering some ten-year-old Hard Copy Observers (dating to the end of 1995). In “Observations: Hard Copy Time Capsule”, I played up some of the obvious differences a decade makes in a technology-based business like ours. This included, in 1995, the “newness” of multifunction machines, shifting tides in the channel and trade show worlds, and the lack of presence (in a commercial, mass market sense anyway) of things now taken as so basic such as digital photography and the internet. This ran in the December 2005 issue of The Hard Copy Observer (HCO), and was intended as a one-time, “guest editorial” feature.

But thanks to the encouragement of Lyra Research and HCO founder Charles LeCompte, and HCO managing editor Ann Priede, it became a monthly feature, and also led to other writing and analysis opportunities, both with Lyra and then the Photizo Group, in two different stints for me, the second coming when Photizo acquired Lyra in early 2012. And the connections made via the column, as well as its “frequency and reach”, has led to opportunities to cover as well as occasionally consult for a wide range of industry participants, which continues today.

The blog “Jim Lyons Observations” didn’t actually come into being until March 2006, but the posts, starting with that premier “Time Capsule” piece, were immediately put up online – a move which came thanks to my publishing-industry-oriented, young-adult children, who advised establishing ownership of my by-lined material via a second, personally-owned “publication”. But the blog soon become more than a legal entity, with more than 700 other posts since, to go with my (now) 96 monthly observations. 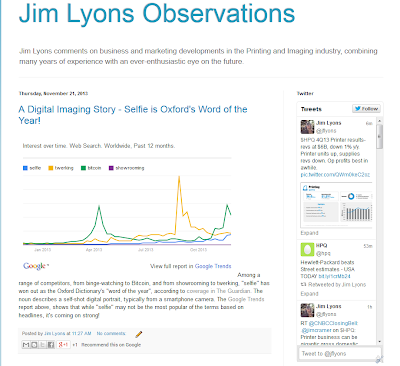 That pace of blog posting, by the way, has slackened off considerably over recent years, replaced for the most part, content-wise, by my frequent tweets. Though these “micro-blog” Twitter entries (now over 20,000) run the gamut with only a portion of them dedicated to printing and imaging, they appear as part of the “look” of my current blog (see above). In the blending of personal and professional worlds, my followers also find out about my among other topics , my sporting interests, photography efforts (often via linked Instagram and Foursquare posts), sense of humor, and recent fascination with mobile technology and its latest wearable iteration, personally experienced by my being a Google Glass Explorer.

And I would be negligent in rounding up my social media activity without including LinkedIn – a valued business tool which I use virtually every day, with much activity directed to keeping up with people in our industry, both from their past lives as well as current activities. When working on “Observations” I frequently seek out or “get to know” industry players via their LinkedIn profiles, often leading to in-person interviews and/or email correspondence.

So with my emphasis in column #1 on industry changes over the previous ten years, what about the span of the last eight? In that 2005 column, I offered that, “The Internet boom, bust, and rebirth all were in the future in 1995, as were digital cameras, MFPs or all-in-ones, Yahoo, Amazon, Google, Napster, iTunes, MP3s, blogs, RSS feeds, podcasts, and so forth.” (As previously mentioned, while some of these were in existence, they had not reached wide recognition.)

This time around, I only need to look back on the paragraphs above, to find MOOCs, Twitter, Instagram, Foursquare, LinkedIn, and Google Glass mentioned – each were virtually if not totally unknown in 2005. And that doesn’t even get into iPhones, iPads, Chromebooks, and Anroids!

So without getting into more cliches (though “the more things change…” comes to mind), I would also like to thank, in addition to those already mentioned, the cast of thousands I’ve met along the way, as well as my current editors and publisher (including the current home for Jim Lyons Observations) at 1105 Media, Larry Barrett, Amy Weiss and Patricia Ames – great folks who I can’t wait to meet up with again face-to-face at the upcoming Business Imaging Expo in Las Vegas!
Posted by Jim Lyons at 5:56 AM 1 comment:

A Digital Imaging Story - Selfie is Oxford's Word of the Year!

Among a range of competitors, from binge-watching to Bitcoin, and from showrooming to twerking, "selfie" has won out as the Oxford Dictionary's "word of the year", according to coverage in The Guardian. The noun describes a self-shot digital portrait, typically from a smartphone camera. The Google Trends report above, shows that while "selfie" may not be the most popular of the terms based on headlines, it's coming on strong!
Posted by Jim Lyons at 11:27 AM No comments:

I am still processing all the interesting information gleaned from the HP Print Tech Days which took place in Boise this week, and am confident my article pipeline is well stocked for the coming weeks and months.

There is one thing I will immediately highlight here (and those on my Twitter feed will have already seen it, and may recognize the screenshot above) - that was the creation of a #throughglass 2013 poster, including a number of my still photos captured since become a Glass-wearing Explorer in mid-August. (And truth be told, there is one photo included in the collection that depicts a colleague borrowing my Glass, but taken with another camera.)

My hands-on poster creation was part of our visit to the "HP Oasis", a center at HP's Boise site (as well as others around the world) where HP's vast lineup of photo and photo-related devices are available to use, free of charge, for employees and special guests (like retirees and members of the press, which hits me twice!). (The Oasis is worthy of a post in itself, which will be coming along here, along with the rest of the aforementioned pipeline.)

(This post also appears on my Glass Half Full blog - googleglasshalffull.blogspot.com)
Posted by Jim Lyons at 9:58 AM No comments:

First off, I believe I have adequate excuses for being addicted to social media. One, as a part-time blogger/journalist/analyst, I use Twitter and other sources as news-gathering tools. Two, as a part-time business professor, I need to stay abreast of one of the biggest disruptors in the history of marketing, and an important element of that knowledge is personal, hands-on experience with the various platforms.

OK, with that out of the way, I am also just plain hooked! And part of that comes from social media's unique abilities to enable connections. Whether it's with becoming re-acquainted across the miles with long-ago friends and workmates, or expanding my reach locally with people of different demographic status but who share common interests in expression and reaching out, or even the occasional "brush with greatness", social media offers "never-before" opportunities.

A recent series of events confirmed to me, once again, an example of this reach. At HP's Print Tech Days this week, we got the scoop that the company had shipped 200 million LaserJet printers. In addition to blogging about it here (see http://jimlyonsobservations.blogspot.mx/2013/11/hp-ships-200-millionth-laserjet.html), I also tweeted and updated my LinkedIn status to include the news. And shortly thereafter, long-time-no-talk long-ago business colleague, Reinhard Anton (@reinhardanton) replied back via LinkedIn that, as our LaserJet product manager in the late 1980s, managed the donation of the one-millionth LaserJet unit to the Gutenberg Museum in Mainz, Germany and even provided the photo commemorating the gift, included above.

A fun, great memory that would not have happened without Social Media!

The information is flying fast and furious at HP's Boise site, at the kickoff of the annual #HPPrintDay, as to be expected.

But in addition to the myriad features and benefits, one big news announcement - 200 million LaserJet printers shipped. The release includes a great timeline of the product's history, going back to 1984.

Stay tuned for more details on those features and benefits...
Posted by Jim Lyons at 8:05 AM No comments: 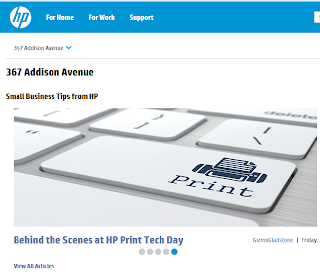 Three months ago, I posted about social media in our industry, promising to at least irregularly promote "best practices" (at least as I observe) them. I am offering a second entry in my nominations for "Social Media Stars" in printing and imaging with this installment.

In August, I highlighted Memjet and their efforts, especially on Twitter and Facebook, and today, I will offer similar kudos for HP, starting with their good old-fashioned blogging at 367 Addison Avenue. (That's the address of the original Bill-and-Dave garage in Palo Alto, CA, for those of you who didn't get the connection.)

This is a relatively new blog, consolidating the efforts of many others which have preceded it, including a printing-focused blog hosted by my fellow HP alum (and then LaserJet marketing vice president) Vince Ferraro - and where I was known to pop up occaisonally as a guest contributor. I found one post, still archived by HP, from 2007, where I provided an update from the Lyra Symposium occurring in January of that year (and continuing its annual run through 2012). The exact date of that post happened to be Febuary 2nd - hmmm. Groundhog Day!

Fast forwarding to November 2013 and the 367 Addison Avenue, their posts include a current one on Mobile Printing solutions (always one of my interests), and the most recent one, from last Friday, focused on this week's upcoming influencer event, Behind the Scenes at HP Print Tech Day, taking place at the company's Boise site. (And in the interest of full disclosure, as a participant in the event, I was interviewed for inclusion in the post.)

Here's a cut-and-paste from the above post, with links to some of HP's other social media outposts. And stay tuned for more about #HPPrintDay right here, as well!

Some references for my aptiQmobile October Observations

Not all my links/references made it into the final copy but thought I would include them here, as (more or less) footnotes.


Pull Printing warrants its own Wikipedia entry http://en.wikipedia.org/wiki/Pull_printing
and I’ve written about Pull Printing too, as can be seen from this Cortado reprint. http://www.thinprint.com/Portals/deutsch/Documentation/Newsletter/Review_CortadoCorporateServer.pdf)

NFC, like pull printing, has its own Wikipedia entry as well – see http://en.wikipedia.org/wiki/Near_field_communication