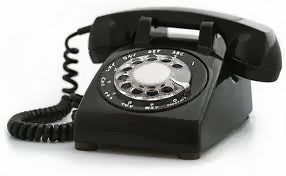 Over the last several months I have been intrigued by a series of thoughts pertaining to mobile printing and document quality. It combines my dual loves as a technology blogger and analyst, both for retracing history and for looking ahead and finding parallels, which pays off by potentially offering insights into how the present will evolve in the future.

To start by going up a level, as a follower of the mobile printing beat since the category’s inception (at least if we define “inception” as the launch of the iPhone in 2007), I've been interested in the development of industry thinking around user needs and market segments. In my 2013 mobile printing year in review (see “We’re getting somewhere,” http://jimlyonsobservations.blogspot.com/2013/12/mobile-printing-2013-year-in-review.html), and also during my Mobile Printing presentation at the Business Imaging Expo in December 2013, I challenged the industry (and myself) to come up with views and insights about mobile printing customers that go much deeper than the typical, high-level, xx% of mobile device users want to print, yy% don’t know how to print, and zz% will definitely print once they figure out how to.

Since then I have looked at one proposed segment of the market, via my January Observations (“Making the case for secure mobile printing, Breezy’s ‘Definitive Guide’ offers insights via a new, free ebook,”  http://jimlyonsobservations.blogspot.com/2014/01/january-2014-observations-making-case.html), and this month, I come back here with one that highlights another group of user needs that don’t apply to everyone, but do indeed fit with what is potentially a fairly large number of users.

That segment I define as those who would like to see high-fidelity, desktop-publishing-quality print (and documents, generally) come to the mobile environment, just as it  developed from the Macintosh and then PC worlds starting back in the 1980s. But before I take a short trip down memory lane to see what we can learn from those days, let me start with a more general technology (i.e., non-printing) theory of “progress” that I might call the “two steps forward, one back” approach to innovation.

My example? It's been noted many times that in our move from pervasive landlines to being highly mobile in terms of our personal telephone communications, we have accepted often greatly reduced call quality and reliability. Mobile phones (remember when we called them cellular phones?) have generally added a great set of customer benefits (contained in their very definition), but at the same time require a compromise in terms of how the calls have actually performed. Happily, this does seem to be getting better, though the best we can hope for is call quality and reliability at parity with the good old days of landlines.

So I ask whether we have made a similar tradeoff with document quality via smartphones and tablets, especially when it comes to printing those documents. Members of the industry have bemoaned the poor translation (dubbed “accuracy” by some) of viewable documents compared to the same printed documents via most of the ever-growing choice of methods of printing from mobile devices.

And it takes me back to my participation in the industry, when the HP LaserJet (introduced almost exactly 30 years ago) brought 300 dpi resolution to the printed page (that “quality” was also joined in our positioning with “quick” and “quiet”), but then we waited still a few more years before publishing-quality typography and formatting became the rule, at least at the high end of the market. Apple’s Macintosh, in combination with its Adobe Postscript-based LaserWriter and Aldus PageMaker software, was the gold standard, and HP LaserJet printers, based on the PCL language, combined with IBM-compatible PCs and Aldus or other software, provided the solution for a larger but not-quite-as-elegant share of the market. Geeks learned from the typography experts about things like “typefaces,” “common imaging models” and “WYSIWYG” (What You See Is What You Get, pronounced “wizzy-wig”), and as printer resolution doubled and doubled again, publishing-quality documents became that status quo in large segments of our business.

And even with efforts to forge ahead with solutions for those print-quality customers in the mobile-printing world (I laud Thinxtream and Monotype here, at least of those companies I am in regular communication with), it can seem a bit of a long struggle, with mobile-based documents of the day somewhere equivalent to the “line printer to Courier” stage of desktop printing. (To those who weren’t around, that was a big step, but looking back, almost laughable to think some would have seen the fixed space typewriter font – i.e. Courier – as any kind of reasonable end point.)

In checking in with a friend who goes back to those days (and who was one of those typography experts the other geeks learned from), I was pleased he had a similar view to mine, in there being a long way to go. He offered (off the record due to his still-active engagement in the industry), “To my mind, the topic migrates quickly to ‘Composing for the lowest common denominator’ where tradeoffs with quality and aesthetics are made for the newly enticing gains of content ubiquity.” And while issuing this articulate view of the state of things, he, at the same time, remains optimistic for progress.

My assertion is that high-fidelity document printing from mobile devices may not be a universal need, but again one that is a top priority with a segment of the business (or potential business). So selling the all-or-nothing approach to the universe is not be the way to go, as we know from targeting market segments.

And as far as indication of hope, and something which inspired these thoughts, came to me via some marketing communications not long ago. This from the San Francisco-apps developer whose product is the mobile word processor, Quip. Their message includes “Quip is a modern word processor that enables you to create beautiful documents on any device – iPhone, iPad, Android phones and tablets, or your computer.” (My bolding added for emphasis.) They go on to point out good modern-day features/benefits of the app, like collaboration, mobility, interactivity, and simplicity, but they had me a “beautiful documents” – now if they can fulfill on that promise, and using our industry’s solutions, get those beautiful documents to the printed page, we’re getting somewhere! I might even add, via a movie cliché, “back to the future.” 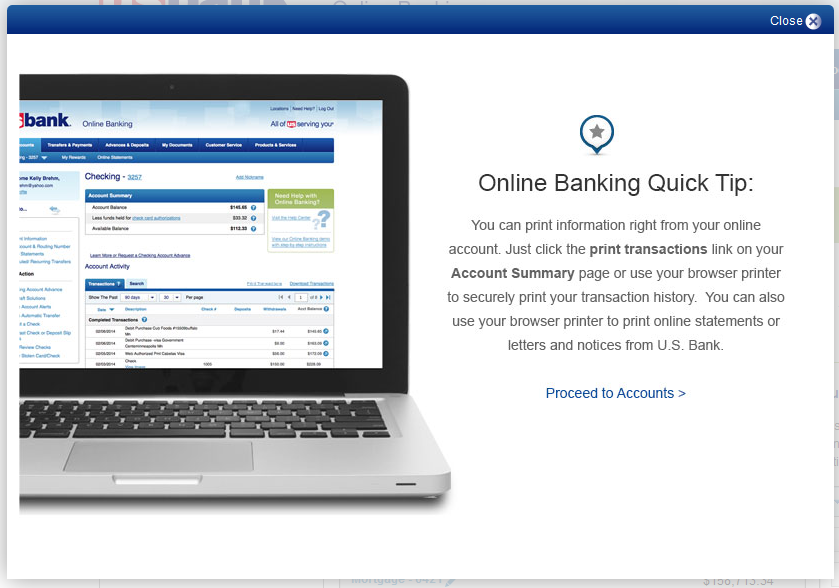 My primary bank has recently upgraded their website, one I've depended on for many years now. There are some new things to learn, but overall, I like the look and feel, and after several months, I am still finding new features I like. And here's one I just was reminded about, via this popup (see screenshot above) - printing! When it comes to financial info, we clearly need hardcopy fairly frequently, and kudos to my bank for seeing the wisdom of making it efficient and easy. 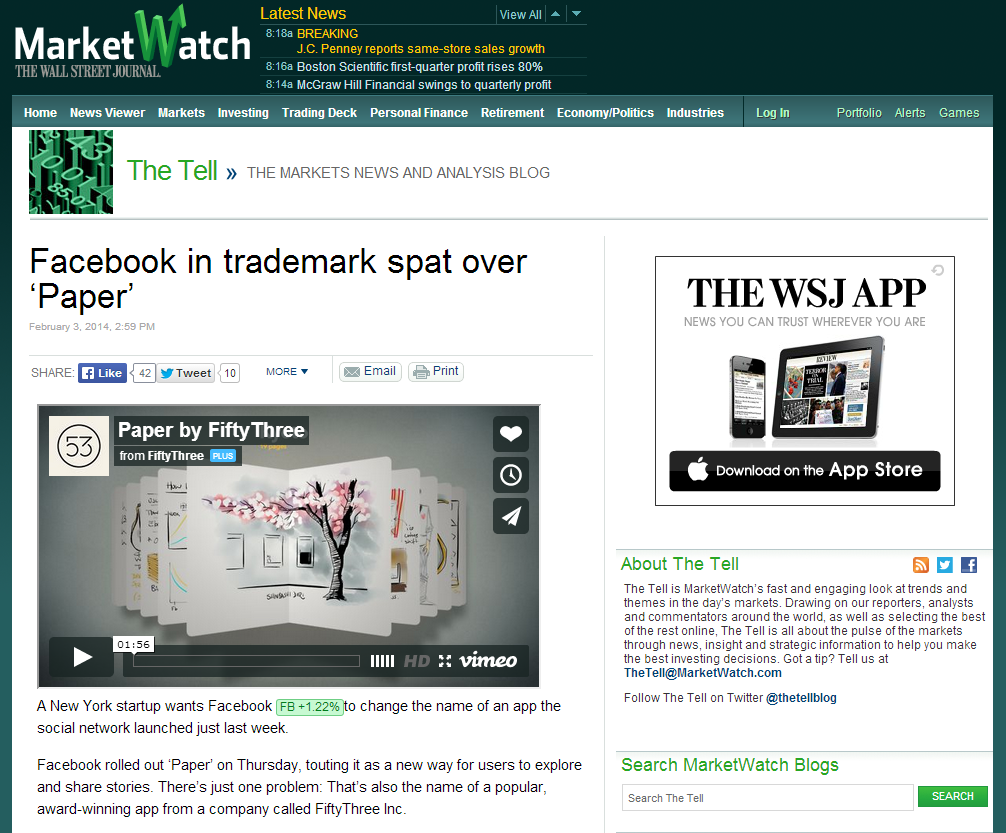 A few years ago, interest (both mine and the rest of the world's) was growing rapidly in mobile devices and their companion apps. One of the things I found interesting was that some of them evoked paper-and-print related concepts, starting with their names, even if in some cases it was more metaphorical than concrete, compared to the "printing apps" I also covered early on and which were often the only means for users to print from their devices, at least in the beginning (for example, see "iPhone Printing Boom").

Beginning in November 2010, I explored a few of the ones in the "metaphorical" category in some detail in a three-part "Observations" series, summarized in the opening paragraph (below) to part three (see "February 2011 Observations - If It Sounds Like Print and Looks Like Print, Is It Printing?").

[February 24, 2011] Since my November 2010 Observations column on ACTPrinter (“All That Glitters...”) and January 2011 Observations column on paper.li (“Paper as a Metaphor”), I have been tempted to fall back on the old saw, “If it looks like a duck, quacks like a duck...” and conclude that these products confirm the importance of printing in our new world, but this is not the case! In fact, these two solutions with print or paper in their names do not actually mean paper or printing in any material sense at all. In the same vein, I offer the conclusion of my three-part series with this month’s feature attraction, Instapaper, the very popular viewing app for iPhone/iPad/iPod Touch (Apple iOS) and other platforms, including Web browsers and Amazon Kindles.


Now a battle brews on the naming of two quite different apps carrying the same, simple moniker, i.e. "Paper". The newest is from Facebook, launched officially on Monday, February 3rd, 2013, the day before the company's 10th birthday, today, February 4, 2013. While I've already downloaded it on iPhone and given it a run for its money (pretty impressive), the first word I had on it (see screenshot below) came from one of my current MOOCs from Coursera and Northwestern University, "Content Strategy for Professionals: Engaging Audiences for Your Organization".

(MOOCs and the broader topic of the Future of Higher Ed deserve a post, or more likely an entire blog, of their own one of these days!)

The other "Paper", from FiftyThree, Inc., is a well-regarded "design" app, as opposed to Facebook's "viewing" app - and I recognize the danger of simplifying these descriptions down to one word. In a Marketwatch blog (see "Facebook in trademark spat over 'Paper'"), as well as in many other places, we now read about the trademark issues.

Much like with Apple and "iPhone", it seems like Facebook clearly knew of the existing product (in Apple's case it was Cisco desktop IP-telephony product line). Interesting to see that the Facebook strategy seems to be to go ahead with the launch anyway, and let the chips fall where they will! (See "How Apple Acquired the iPhone Trademark from Cisco".) 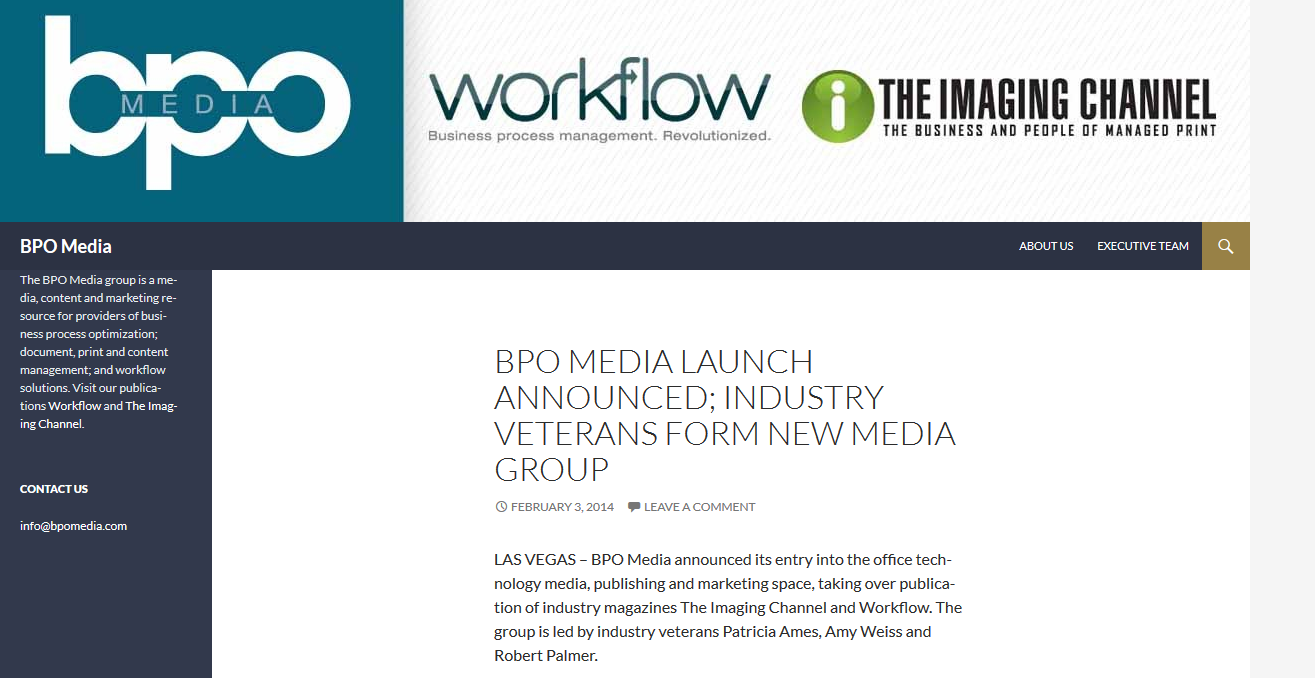 A quick post here to note that a new industry media firm has been launched! In a press release from late this afternoon, the newly formed company will be taking over publication of industry magazines (and websites) The Imaging Channel and Workflow. Readers might recognize those pubs, where I've been honored to be a contributor since 2012. More news on this to follow, but for now, congrats Amy, Patricia, and Robert, and I am thrilled to be part of the team of contributors!
Posted by Jim Lyons at 5:02 PM No comments: