Product innovation leading to business success can take many forms, as it turns out. In my May Observations (see "Time names HP Deskjet as 35th 'Most Influential Gadget'"), I started with the HP Deskjet printer’s recent inclusion on as one of the 50 most influential gadgets of all time.  As the Time list’s description points out, the Deskjet’s influence has to do with its fundamental technology and its link to HP’s recent entry into the futuristic world of 3D printing. But what other entries of note can be found on the Deskjet family tree? This month I take a look at some less-than-direct descendants as well as some other tech innovation examples.

My motivation for a deeper dive can be attributed to the fact that I have always enjoyed these stories of innovation, but also, in preparing to teach another round of “Product Design and Development” to a group of graduate students in University of Phoenix’s MBA program. The “PD and D” class is the final marketing elective option in the curriculum, for those specializing in marketing, so it never hurts to brush up a bit! In my goal to be prepared, I have been reviewing some of the thinking in our text on product innovation.
(Davila, T., Epstein, M. J., Shelton, R. D. (2013). Making innovation work: How to manage it, measure it, and profit from it. Upper Saddle River, N.J: FT Press.)

So starting with recently detailed 3D Printing offering from HP Inc, the HP Jet Fusion 3D Printing Solution represents the type of innovation story that most people can’t resist. The result of years (decades actually) of tireless research, originally focused on something much more pedestrian (in this case, the humble HP Deskjet printer), is now deployed in a dramatic new application of the technology that results in a world-changing solution. Time will tell on that “world-changing” part, but again, there is no more classic an innovation tale than this one.

But what about variations on this theme? Everyone seems to love the story of internally developed technology finding its way into new, even surprising, applications and markets – but it might even be better, at least from a story-telling standpoint, when the technology deployed has been initially dismissed as a failure. This is a “rags to riches” kind of tale that keeps Hollywood afloat, and 3M Post-it notes are a favorite example– the adhesive that “wasn’t sticky enough” but ended up creating a whole new product category and even one could argue a new and improved form of office communication.
3M’s Post-it Notes were based on a product development that wasn’t sticky enough
So there’s one model, the intended long-term investment in technology, with one variation, with the common thread that both HP 3D Printing and 3M Post-it Notes remained under the same corporate roof through their development life cycles. But what about a technology that is transferred between entities and takes on new ownership?

Acquisitions – For better or worse

One might first think of corporate acquisitions here. Having been involved in many during my HP career, it is not a surprising conclusion to make that the success of acquisitions is a mixed bag. The Indigo purchaseclosing in 2002 got HP fully into a commercial printing space that would have been a difficult leap with its existing, in-house technology; Exstream on the other hand was a technology solution to go along with commercial printing (direct marketing software) that seems to have never quite stuck, and was sold off by HP earlier this summer. (See “HP Inc. Announces Divestiture of Certain SoftwareAssets to OpenText”, and note there were four offerings included in the sale, but Exstream is the one I judge to have been most prominent, biased no doubt by my following its acquisition by HP in 2008 in my role as a blogger/analyst.) As another printing-and-imaging example, Snapfish - the photo-repository and finishing service - took HP into a desired direction at the time (2005), but again did not endure as part of HP’s portfolio (see “HPsells Snapfish - cites ‘focus’”.) 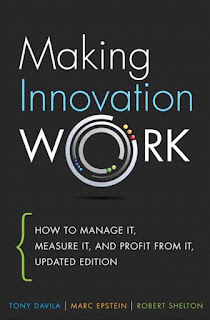 For startup companies, one of their most-desired milestones is the “liquidity event”, which often takes the form of an IPO but many times is a corporate acquisition. But acquiring an exciting young company with breakthrough technology is hardly a panacea for the acquiring firm. As my class’s text concludes about mergers and acquisitions, they “…achieve growth, and they can be important tools to bring into the company building blocks of innovation. But they cannot provide the same sustained lift as robust organic innovation. (p. xvii, Davila, Epstein, Shelton (2013).)
Internal New Business Creation
But what about the other way around? What happens when an innovation-intensive corporate culture begins to over-fill the pipeline with technology building blocks of their own design? Sometimes, independent units of “intrapreneurs” are organized to attempt to capitalize on the “raw material” generated by teams of engineers and research labs.

Going back to my years with HP and the Imaging and Printing Group (before I departed in late 2005), the site in Corvallis, Oregon had a New Business Creation organization centered there, with emphasis on using the intellectual property generated around inkjet printing to apply to other fields, some more closely related but with others very distant. For example, I remember a number of ideas aligned around dispensing patient prescriptions via inkjet-based devices, but none of those had commercial market success.

In good HP engineering-culture fashion, the “NBC” process had been broken down into a series of steps, many if not most of them metric-driven. Typical of the thinking of that time (the “Fiorina era” for lack of a better label), future growth for the company was foreseen as coming from a few “big bets” with plenty of “wood behind the arrow”. A typical "hurdle rate" for the new business ideas was something that could be seen growing into a “billion dollar [in annual revenue] business”, a target which can end up being more than a little daunting.

But what about a more unusual approach, divesting the internally developed technology to a group of entrepreneurs who might just be able to focus down enough to find market success but measured, at least initially, on a much more modest scale? Tim Koch (pronounced the same though spelled differently than the Apple CEO) is a long-time HP engineering manager, who along with another HP veteran from the business side of the house, departed the company in 2013, effectively taking a technology with him. He is now Chief Technology Officer for 3D Nanocolor, based in Corvallis, Oregon, in rented space that is on the same site that still houses Hewlett Packard and goes back to the calculator days.

The intellectual property in question was sold, by HP, to Marathon Patent Group, which in turn owns 3D Nanocolor as a key asset of their commercialization portfolio. While not the time or place to provide a full account of the technology and its commercial possibilities, from the company’s description, “thin-film plastic roll-to-roll technology that can be used for electronic smart windows as well as other application where electronic control of ambient lighting is needed.”

In a recent conversation with Koch, we discussed innovation and what it takes to convert basic technology to a commercially successful product. Having experienced the NBC process and its overly high expectations (we overlapped but never knew each other during our respective HP careers), Koch’s insight into the current innovation challenge is impressive and seems perfectly suited to the challenge at hand. “It’s critical in our role to not try to do something terribly complex,” he told me, and the company is well along the path to market penetration. As he states, “the story is yet to be told…” but again going back to my textbook, sometimes multiple, small steps can be far more effective in innovation than one giant one.

James Douvikas, Koch’s counterpart from HP who now is 3D Nanocolor’s CEO, adds, “Through the ground-work laid by the HP R&D teams, we now have the opportunity to take the electronic film technology into a wide variety of very large markets like windows with the potential to "make every surface change.”

In Conclusion
So betting my long-time readers, those who have been with me for most if not all of my now 10-plus years of Jim Lyons Observations, may get tired of this, we will be watching and waiting for further news from 3D Nanocolor and other HP Deskjet technology descendants!