As I read about the decline in HP Inc's ($HPQ) share price in today's stock market, and the reasons behind it (see "HP Hits a Jam with Printers"), I immediately thought of some anecdotal data I gathered earlier this week. In the proud marketing research traditions of "the focus group of one" and "the last customer I talked to", let me explore what could be going on behind these observations.

I found myself in an Office Depot ($ODP) for the first time in a long time, and in addition to looking for another supply item (whiteboard markers), I needed to buy a ream or two of printer paper. This was my first paper purchase in quite some time - I am guessing at least a year - and our multiple home and office printers were all in need of paper reloads.

I was a bit surprised by the pricing, having remembered basic copier/printer paper typically at under $5 a ream, sometimes well under, but I finally found a deal on Hammermill (brand name - nice!) at $10 for two. (Though $6.99 for one - I hate that!) So I grabbed my two reams, along with the markers, paid at the front and exited, with the courteous checker reminding me that my receipt included a coupon to be used on my next visit, for "25% off (selected) printer ink products, when buying two or more," or something like that. Again, these complicated and restrictive offers annoy me!

Getting the paper back home (actually on the front seat of the car while driving back home), I noticed details on the packaging that I found fascinating. Both the front (teaser) and the back (details) touted a Hammermill smartphone printing app, named "Print Hammermill".  Offering basic mobile printing functionality, their app seems to do what many others have already provided, but at least I like their three customer-need-based scenarios, from home, work, and school.

As a blogger/analyst following the development of mobile printing from the beginning (see April, 2008, "iPhone Printing Revisited", for example), at one time I probably would have been thrilled to see this, as further validation of an important imaging and printing trend. "It's not just printer OEMs and a handful of mobile apps startups..." - I can see the opening line of my post now, in 2010 or 2012, maybe. In mid-2016, it now seems unnecessary and even somewhat desperate.


What I found more than a little strange however, but again keeping with grand marketing traditions, was the limited-time "offer" that the app could be downloaded free, from both Apple's App Store and the Google Play equivalent, for iOS and Android mobile devices, respectively. The tease on the front dared to declare a "$12.95 Value", only continuing, per the details in fine print on the back, "until 12/31/15", or "while supplies last". And just how are supplies exhausted with a downloadable software app? I am not sure.

I had a few further take-aways, as well. While no "fresh-until date" applies to copier/printer paper, the fact that the expiration date of the offer is six months past tells me that paper - like other printer supplies - is just not moving like it used to, at least through the Office Products channel represented by one Office Depot in Boise. And the continuing presence of the app, with a new version as of May and still free on the Apple App Store (see above), is a good sign. However, the web address offered on the packaging is a dead end, at least when I try it today, so the enthusiasm by International Paper (supplier of Hammermill) is a bit of a mixed bag, at least as seen by this observer.

And before I get too snarky about the app itself, the App Store reviews going along with the 10 ratings for the new version were glowing. The "all versions" screen shows a 5-star average for 498 ratings, with a sampling of the reviews (not unexpectedly) very positive as well.

And the final question - have I tried it? Not yet - seems I just don't print that much...

NOTE - Last Observations I promised a further look at spin-off technologies from HP's printer unit. That topic will be covered in my July Observations.
Posted by Jim Lyons at 10:20 AM No comments:

HP and Shutterfly announce largest Indigo deal ever - partners for over 15 (or almost 10) years? 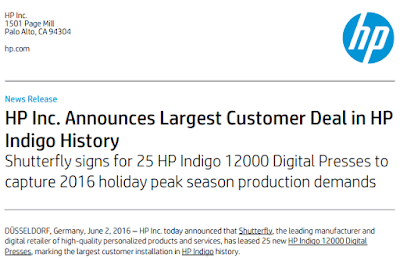 During the quadrennial Drupa Commercial Printing conference, continuing through June 10, many deals and partnerships are announced. HP has featured some of this year's big ones, including what its press release bills as its largest Indigo press deal ever, with Shutterfly's leasing of "25 new HP Indigo 12000 Digital
Presses, marking the largest customer installation in HP Indigo history."

HP has a Shutterfly "success story" on its website, with a PDF dating back to 2005, recounting the company's history with HP Indigo presses. And per Cary Sherburne's recent account of the deal at "What They Think", HP/Indigo's Alon Bar-Shany is quoted as saying that Shutterfly has been an "Indigo customer for more than 15 years", which would go back to before HP's 2002 acquisition of the Israel-based firm. All that makes sense to me, having been around as an insider leading up to and following the aforementioned acquisition.

I was also around for the rather awkward discussions between Shutterfly and HP, when another acquisition occurred. It was the deal, also in 2005, in which HP bought Snapfish, a leading Shutterfly competitor. That came much nearer to my exit as an HP employee, but I was around to witness some tense interactions between the companies, with Shutterfly challenging HP judgement and intention in buying their leading customer's (Shutterly's) fiercest foe.