Some advice, taken, on reading for the new year 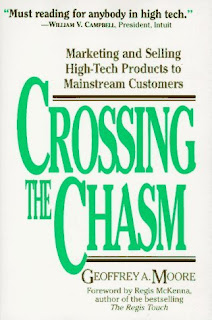 I enjoy keeping up with Ryan Holiday (@RyanHoliday) and his thoughts, and subjects like stoicism and reading. In a recent Medium post, A reading list for becoming a better citizen and person, he had one bit of advice near the end that really caught my attention.

But if I had one final recommendation for reading this year, it would be this: Pick three or four books you’ve already read, that had a big impact on you, and read them again.

In my case, it was an easy choice, as I had already just purchased this classic: Crossing the Chasm, by Geoffrey Moore (@geoffreyamoore). I will have comments in the coming days or weeks, but so far so good. This classic, originally published in the 80s, was revised five years ago, and the reading has been great, as I have really just begun, with lots of fun to follow!
Posted by Jim Lyons at 8:29 AM No comments:

Review: A Tree Grows in Brooklyn

A Tree Grows in Brooklyn by Betty Smith
My rating: 5 of 5 stars

When asked "what it's about", Anna Quindlen writes in the forward to the 75th anniversary edition, "The best anyone can say is that it is a story about what it means to be human." I've given many a five-star rating to books over the recent years - often figuring they had to be a five-star book for me to hang in there and finish them - but this one rises far, far above most of those other five-stars. I had heard of "A Tree Grows in Brooklyn" for many years, and fortunate enough to have received it as a gift this past holiday season, I dove in and had a hard time stopping, through its nearly 500 pages. Through laughs, tears, and more than a few pauses to look up words or cultural references from 100 years ago, I have never enjoyed a book more than this one. It is hardly a surprise that it found a place on the recent "PBS Great American Read Top 100" list.

View all my reviews
Posted by Jim Lyons at 1:32 PM 2 comments:

Review: Birding Without Borders: An Obsession, a Quest, and the Biggest Year in the World

Birding Without Borders: An Obsession, a Quest, and the Biggest Year in the World by Noah Strycker
My rating: 5 of 5 stars

What a great book - combining my interests in birding and travel, and bringing to life the author's year-long effort to see half the world's bird species (or more). The fact that Noah Strycker hails from Western Oregon doesn't hurt either, and his connections with the Cornell Lab of Ornithology are great for me, too. Here's a brief passage that mentions both, as well as leading to the trade-off between his objectives and those of the typical birder: "After leaving home in Oregon, not to return until this year was over, I’d landed in Ithaca to meet Tim Lenz, a full-time programmer for the Cornell Lab of Ornithology’s website, eBird, which I was using to track my sightings for the year. Tim spends his free time birding his brains out and knew where to find the species I sought in New York, partly because he’d catalogued them all in eBird. He was wiry, precise, and about the same age as me. The two of us were near Cayuga Lake, looking for common birds such as Upland Sandpipers and American Black Ducks, when Tim received a WhatsApp message on his phone. 'Wow,' he said, suddenly at full attention. 'It looks like someone just reported a Brown Pelican flying over the lake. That’s, like, the first inland record for New York! We’ve got to go see that bird!'"

I was taking my time with this book for awhile, a "slow read" that is so interesting and well-written that it was not a book I wanted to zoom through. But after returning the borrowed hardcover, and buying my own ebook version, it was time to make some time. Here's another example to end with, this time of his advice from near the end of the book that I just love: "Know that the world is much friendlier than it often seems, and don’t be paranoid. Eat the street food—it’s tasty, cheap, and healthy—and talk with the vendors. If a problem can be resolved for $20, spend it and move on."

View all my reviews
Posted by Jim Lyons at 12:08 PM No comments: