Having been traveling for the majority of May and the latter half of April, it’s interesting to note what makes it through to get my attention. I had multiple “off the grid” stretches spanning a few days each, and was out of the country much of the time, but still managed to stay aware of at least some of the big and small news stories of the day. (Of course, I may never know the ones I missed!)

One item that peeked through the haze for me was the May 3rd publication of Time’s “The 50 Most Influential Gadgets of all Time” (no pun intended, I am sure.). I got the tweet about Apple’s iPhone at the top of the list at Number One, but couldn’t wait to get to the entire list when my internet access improved, which it did a few days later. And, lo and behold, I found a printer on the list of 50!  While my first reaction (and personal bias) was an expectation of seeing the HP LaserJet as one of the most successful gadgets of all time, it was the HP Deskjet printer that made it, at Number 35. Time’s writers included an interesting blurb to go with the ranking, and one that in the end I couldn’t disagree with.

Notice I expressed my thoughts of “most successful gadgets”? It was natural, but incorrect, to make that mental switch to “successful” from “influential” as I did back then and carried through in recalling my thinking. Keeping in mind the article’s sub-head, “The tech that forever changed the way we live, work, and play,” Deskjet got its due in Time’s list of influential gadgets, as being the replacement for noisy, low-print-quality dot-matrix printers in hundreds of millions of homes. And while I could quibble with Time's reporting on the exact details of dates and prices, the decade when it launched (the 1980s, which they got right) was a long time ago, and to say the Deskjet and its inkjet printer relations are venerable would be quite an understatement. Time concludes their paragraph quite profoundly (though perhaps a bit quick to write off printing altogether), as follows:

“Even in an increasingly paper-less world, the inkjet’s technology lives on in 3-D printers, which are fundamentally the same devices, only extruding molten plastic instead of dye.” 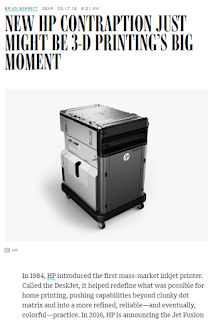 Which leads to another story from the month of May (and another I had to catch up on following another trip) – HP made good (at least filled in many more details) with respect to its 3D Printing efforts. While far from a “gadget” (Wired saw fit to call it a “contraption” in their coverage), HP’s Jet Fusion 3D is a $130,000 machine aimed at industry, with initial partners like BMW, Johnson and Johnson, and Nike. But I will postpone more on the latest on the 3D printing topic for future Observations.

One other aspect of the Deskjet, beyond the technology, that could have been included as extremely influential? That would be the “razors and blades” business model that really started with the Deskjet, and that HP has driven home for decades. The LaserJet side, partly as a result of sharing the business with Canon, has never quite arrived at full implementation of this model. But as far as the inkjet business, where HP has all the dials and knobs under its sole control, the model continues to dominate to this day – an example is the $20 Deskjet 3633 all-in-one (including scan and copy along with printing) that appeared in Cnet’s Cheapskate blog just last week.

That’s not to say I was only looking for printers when I found my source. I was fascinated that the list (sorted in descending order, i.e. Z->A, for those Excel-happy folks) included other products I have used -- and in some cases have a real soft spot for. Right there at Number 50 is Google Glass, and as a Glass Explorer going back to 2013, it's a more complicated mix of emotions that I feel on this one, though I can attest that Glass was a bold experiment that got people talking and thinking, even if it was not a commercially successful product in its own right, and least in its first iteration.

More nods of appreciation came from me seeing Nest (Number 44), the Osborne 1 (preceding at 43), Palm Pilot (right behind Deskjet at 36), Tivo (29), Amazon Kindle (28), and those are only a few highlights from the second 25 of the top 50, please keep in mind. The full list is a trip down memory lane that should not be missed!


So was I happy it was Deskjet and not LaserJet make the list? Laser printing elitists might hide behind an excuse following the theme that the HP LaserJet (like the aforementioned 3D printer) is far from a “gadget”. And it could be argued that LaserJet printers and MFPs are communications tools critical to automating and thus transforming the modern office and its workflows, gadget or not. But I won’t take that road. I think the choice was the right one, particularly with the pedigree of the company’s current 3D Printing effort leading back to this seemingly humble technological ancestor. And returning to that “Influential” in the title of Time’s list, it’s appropriate for the first extremely popular inkjet printer from HP to be on the list. Next month, we’ll see there is more than 3D printing that can be found on the Deskjet family tree.
Posted by Jim Lyons at 9:09 AM No comments:

As a long-time "quant" going back to my undergraduate days at University of Oregon, I have loved taking the opportunity for "retooling" a bit over the last several years, with the latest in statistical theory and tools via the MOOC revolution. My current challenge (the second in a series of three in an "XSeries") is from edX and Delft University of Technology, and titled "Data Analysis: Visualization and Dashboard Design".

The most recent assignment fits just perfectly with tomorrow's HP earnings announcement. Taking the 10 years of quarterly data I have compiled since beginning my second career, I entered IPG (Printing and Imaging) quarterly revenues (in billions), and let Excel 2013 plot a trendline and make a forecast based on a simple linear model. (Compared to undergraduate days, it couldn't be more simple!)

Before tomorrow's announcement, I wanted to share the model's purely technical, simplistic forecast of a $5.3 revenue quarter for HP Inc.'s printing unit. From eye-balling the data and their seemingly increasing negative momentum, one might judge this forecast to be a bit high. We shall see tomorrow after the market close - stay tuned!