The subject line of the email read, “Art Institute of Philadelphia Announces Collaboration with OKI Data Americas to Integrate Printing Technologies into Curriculum.” When I saw this press release back in August, I couldn't help but become immediately intrigued. Four months later, this interest and many helpful parties led me to an inspiring personal visit to the site of this collaborative effort.


The specific OKI printer involved in the collaboration, the graphic-arts-oriented C941dn, is out of my normal range of home and office (and more recently mobile) printing. The application area, again, graphic arts, is also beyond the majority of my most direct industry experience. The other parts of the equation, however, were absolutely compelling to me, as both a story for my readers and a situation I personally wanted to tap into. And something that IS on my regular beat and that gives me plenty of latitude as far as exploration is the future of printing, so this collaborative effort was of high interest. The direct involvement of college-age students promised to offer great insight into “the next generation” and its views on print. Throw a few pieces more on the practical side – the fact I am a frequent visitor to Philadelphia and surrounding environs, and as evidenced by my part-time professor role of the last few years, I really enjoy being around students - it seemed like a natural to request a visit to the Art Institute of Philadelphia and to see the printer (and its users) in action. OKI Data and its representatives were more than accommodating, and before I knew it, they had set me up for a pre-Thanksgiving visit. I am excited to report a few of my findings here.

Observing Products in the Field – A Great Idea!

As a long-time participant in the tech industry and as a part-time marketing professor for a number of years now, field testing of products is generally of great interest to me. Having been involved personally on many occasions, I was aware of the value and insight that can be gained, even with implementation challenges and the risk of hearing news that is not necessarily what was hoped for. The release described the arrangement somewhat idealistically as can be expected, as follows: “The two organizations will work collaboratively throughout the course of this [three year] engagement to maximize the experience for all involved. This will include regular feedback from The Art Institute of Philadelphia’s staff and students on their experience with the C941dn, as well as ideas for expanding the device’s capabilities.” Just the idea of getting “up close and personal” with users, finding out their likes and dislikes about the product in question, and really getting into their heads is a hallmark of good marketing and customer understanding.

My Visit – Extreme Enthusiasm and the White Toner is ‘Blowing up’!

I was very impressed by the enthusiasm of both the students and professors for the C941dn from OKI Data, which they had been exposed to since August. The five students and one professor who joined me for a group session brought numerous examples of their work. As can be seen in my photographs, they all brought examples of their work using the machine’s “white toner” capabilities. This, of course, provides much more flexibility in printing on dark-colored stock, and invites a lot of experimentation. In their professor’s words, “It's the white toner that's just blowing up,” or, as a baby boomer like me would say, “The white toner capability of the C941dn has led to the students exhibiting a great deal of creativity and enthusiasm”.

One of the other features of the printer (see this article for more details), the clear toner, which offers the ability to put a shiny surface on top of an otherwise conventional print job, seems next on the list for the students to try. And process-wise, the C941dn’s presence in their classroom as a means to test-run pages prior to sending to their in-house service bureau was unanimously popular as a step- and time-saver. And just the easy access and openness to experiment (credit to OKI Data and the Art Institute of Philadelphia) has clearly made the collaboration a big success in just the first months of its three-year commitment. 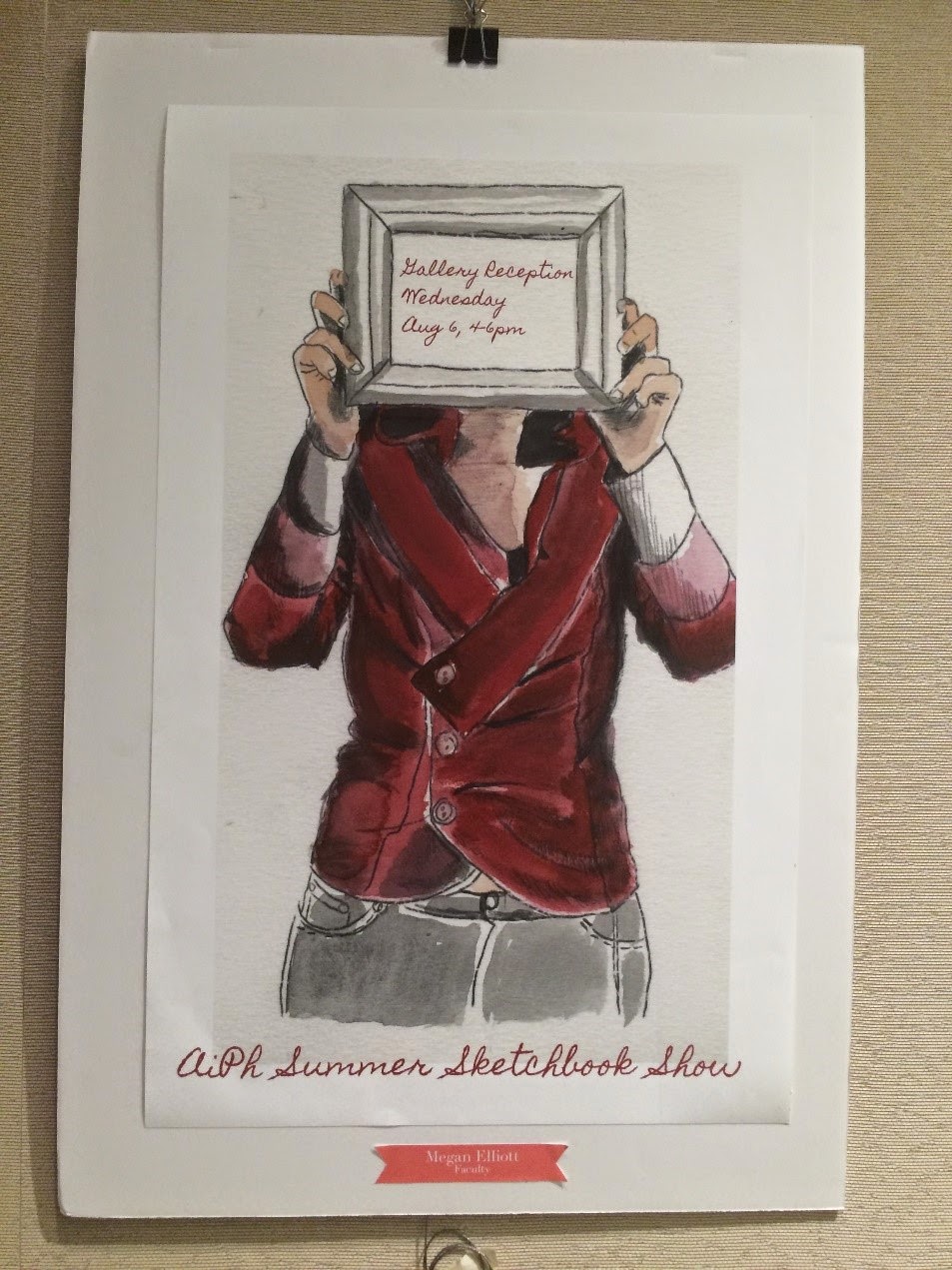 The students’ enthusiasm for print generally and the C941dn specifically was very high, to the point they looked at me almost quizzically when I described my interest in the thought that some millennials were “over” paper. We did discuss the place for hard copy and the place for electronic communication, with many relating experiences with invitations, cards, and the like, which really only worked with physical print. (The professor estimated the split in their design curriculum is about 50/50 between hard copy and electronic.) And as far as something approaching production, output from the C941dn, in many varied forms, was part of the Art Institute of Philadelphia’s recent “Sketchbook Show.”

From my brief visit, I believe this has been and will continue to be a very successful collaboration and that at least for the graphic-arts world, OKI Data has a huge market opportunity with its robust C941dn (and no doubt models to follow), with the white and clear toner features as real differentiators. (I’ve posted a look at white toner in a guest blog at Actionable Intelligence – add link.) Back to the field testing, though, I owe great thanks to the Art Institute of Philadelphia’s administration, faculty and students, as well as OKI Data Americas, for the tremendous access they offered me.

I know I've pulled the "Ten Years After" classic-rock reference out in the past, but this time it really fits! On the continuing theme of my previous post, "While I Was Away", I am late getting up a link to my quarterly results spreadsheet for HP's Printing unit. Once again it was a solid if unspectacular quarter, assuming "solid" means low-single-digit year-to-year percentage declines across the board. For those counting, it's now been 15 quarters since the former IPG has posted a non-negative percentage "growth" number for total revenues.

Now, to the Ten Years After part! While researching another blog post (coming to a screen near you very soon!) I discovered a reference in the August, 2005 edition of The Hard Copy Observer. Since we are coming up on 2015, this makes it essentially ten years ago, when the front-page article quoted former IPG chief Vyomesh Joshi as follows, "...Joshi said he expects HP to double its printer business over the next 10 years from $24 billion in annual revenue currently to $50 billion— quite a tall order for a company that saw a 6 percent dip in revenue growth for the quarter that ended in April compared with the same quarter in 2004."

While technically the forecast has another year to be measured, interpreted quite liberally, HP closed out FY2014 with revenues just a shade under $23 Billion, at $22.979 Billion to be precise. Note that this figure comes short not only of the ten-years-out projection of $50 Billion, but also the baseline FY2004 revenue of $24 Billion. The profit picture, in fairness, is quite a bit better (the article refers to profit margins in the 14%-16% range back then, with margins over the last 12 quarters ranging between 16% to nearly 20%), meaning HP is bringing in more profit dollars than ten years ago, even with revenues slightly less than back then.

This is not so much about our industry leader HP, but more a reflection on ten years of time in a tough environment for a industry facing numerous challenges.
Posted by Jim Lyons at 2:29 PM No comments: