September Observations -- Back to School edition -- the state of college textbooks

The Hard Copy Observer, September 2010
Observations: Back to School edition -- the state of college textbooks

“I suppose I could collect my books and get on back to school,” is a familiar line from a well-known song and an extremely popular radio hit during my first year of college oh so many years ago. So when it is “Late September” (again, quoting from the same song, though where I live, the timing is typically a month or more earlier in the year), my idle thoughts are often pulled “back to school.” After many years away from academia, I am back and recently much more actively involved. I have offspring in pursuit of undergraduate and graduate degrees and have been working on the faculty side, teaching graduate marketing and undergraduate economics for the University of Phoenix (UOP). My teaching is in addition to my awareness, as writer of this column and commentator, of all things “print,” and my interest is always piqued by a printer or printing situation in a state of flux. And if there was ever a product category in flux, the college textbook market is it.

So I could not have thought of a better theme for my September 2010 Observations column than college textbooks and opportunities that may be coming to the printer industry. I am far from the only industry commentator to pick up on the many issues and changes in the textbook industry—far from it. Frankly, what started as a simple matter of pulling together sources for this column quickly became a bit overwhelming. Between traditional textbooks and new laws, the used and rental markets for texts, print-on-demand solutions, and various e-book schemes, past and present, the college textbook market is extremely dynamic, to say the least. However, I have pulled together some interesting examples, including personal experiences, and conclude that this industry has only just begun to change.

As a teacher of marketing and economics, I am always on the lookout for interesting articles to help make subjects come to life for my students. I had a major windfall earlier this year for my pricing and supply-and-demand discussions with a piece that appeared in broadcast form and also via the Web from the combined CNN-Money news organization. Titled, “America’s Nine Biggest Rip-offs,” the piece highlights such obvious “rip-offs” (mostly products and services with extremely high profit margins) including text messages, movie popcorn, and hotel minibars. And right there with them, number six on the list, are college textbooks, with students taking an average hit of $900 during a typical year of study. But unlike the examples of movie and hotel room treats, where raw material costs being a small fraction of the retail price, and thus inspiring the ire of CNN-Money, the textbook category was attacked for having overall prices rise at twice the rate of inflation (from 1986 to 2004) -- which as parents like me will attest, also sounds a lot like a typical college tuition price-escalation curve! 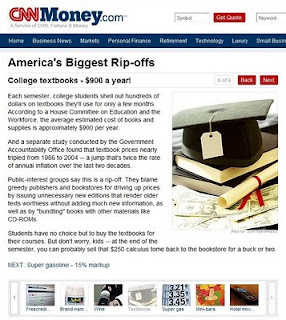 Also cited as part of the textbook “rip-off” are obsolescence-inducing product rollovers (called new editions in this business), where replacement versions with moderate-at-best enhancements devalue previous versions too soon after they were purchased as new, and thus severely erode the old books’ “used” (i.e. aftermarket) value. Sound familiar? And for those not directly familiar with textbook sticker shock, take a look! (See illustration…)

In my classes, I ask students to talk about why these “rip-offs” exist, and thoughts about “captive markets” and “lack of competition” often arise. The presence of these factors may indicate an opportunity for disruption or a new way of doing things and perhaps a call for regulation. And as I’ve looked around the college textbook industry for examples, all of these are present.

One of the most durable concepts in economics is that of Adam Smith’s eighteenth-century “invisible hand,” which dictates that forces in the economy and society at large will lead to suppliers meeting the needs of consumers, in this case, better bargains on textbooks that will only be used for a short period of time. The classic remedy is the presence of the aforementioned used or resale book market, with a combination of traditional intermediaries or newer ones (e.g. the college bookstore or eBay), but, again, quickly obsoleted editions may be increasingly blocking the effectiveness of this approach. Rentals of textbooks have become popular of late, too, though the rental prices often carry similar sticker shock to the new, retail purchase prices, with rentals often amounting to half of retail and including shipment costs and hassles. (The role of government and specifically government regulation might be thought of as the more visible hand – see illustration.) 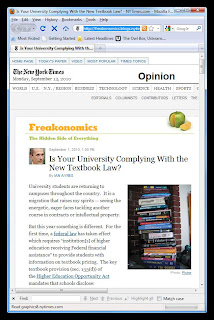 Thus, enters technology … with all the promises (and successes) of e-books over the last several years. This year’s emergence of sub-$200 Amazon Kindles and their ilk, along with the more versatile Apple iPad, which has been touted by many as the key to “the future of book publishing,” all beg the question, “What about electronic textbooks?” The electronic solution certainly argues for lower costs, though the aforementioned “rip-offs” article reminds us that the issue is really not about cost. E-books are hardly a new idea—for example, Amazon’s Kindle DX was touted as a textbook solution at its introduction several years ago, with participating universities in a trial program. (See the 2010 Reed College report for their “close but no cigar” appraisal.)

We know that a number of new tablets are poised to enter the field of electronic textbooks, which is already estimated to have generated about $40 million in sales in 2009, according to Rob Reynolds of Xplana, who is quoted in a market overview in The Wall Street Journal by Jeffrey A. Trachtenberg (see “Textbooks up their game,” 8/19/2010). The piece discusses several iPad-based initiatives and points to the opportunity to make e-textbooks enhanced, multimedia learning tools and more than simply repurposed PDF versions of the hard-copy versions.

But what about the users? There’s a bit of marketing wisdom that dictates it always pays to make sure that “the dogs eat the dog food”— no matter how many improvements, bells and whistles, packaging changes, ad campaigns, jingles, etc., testing what the customer really wants and likes is still vitally important. And so far, results, at least one notable set of results, would indicate that a majority of students prefer traditional texts. RIT’s “Print in the Mix” Web site (“a clearinghouse of research on print media effectiveness”) reported on a study at 19 campuses in the fall of 2009 which concluded, “74 percent of U.S. college students still prefer to use a printed textbook when taking a class.” While a 74 percent majority is impressive, the inclusion of the word “still” in the headline infers a future of change.

And what about my own hands-on experience as a faculty member, using the University of Phoenix’s completely electronic e-textbook library, for my own use as well as that of my students? I have written before about the artifact nature of the term “papers” in the UOP academic process, at least the way my classes operate. Students complete individual and team assignments once a week during our accelerated classes, which I grade and turn around within the six-day requirement. However, the papers are rarely if ever “reduced” to hard copy, at least on my end. Like my faculty peers, I have become adept at using the tools of the trade such as multiple monitors and Microsoft Word’s “comment” feature. I do not even own a red pen. So what about textbooks? Our entire assigned library is in e-book/PDF format and consists of popular (and a few obscure) titles from the catalogs of McGraw-Hill, Pearson, and other major textbook publishers.

For the most part, I use the textbooks online via Adobe’s Acrobat reader, with the occasional chapter, or more likely a section, printed locally, in my office or the University’s, for further study, perusal, and/or markup. I eagerly await an iPad or Kindle solution (based on the digital rights management solution yet to be completed – see illustration), and those occasional prints will no doubt be reduced as I read and annotate on the comfort of my iPad and free myself from the restraints of a traditional PC. 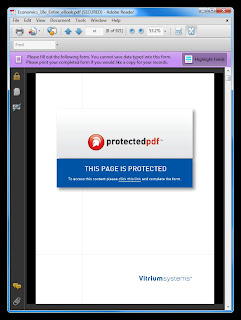 As for my students? I have been asking their opinions and practices on a regular basis for some time, and their responses are all over the map but generally fall into three categories: read exclusively online; print chapter-by-chapter on home printers or at places like Fedex Office; or source the traditional hard-copy versions from resellers like Amazon (new or used) and go about their reading the old-fashioned way. Fittingly, the nature of their responses is one of my big lessons for all my marketing students (along with the dog-food analogy): markets are composed of segments!

Now as I reach the end of my allocated word count and go back to read my title, “The State of the College Textbook Industry,” I realize how I have only really scratched the surface, and this topic was perhaps an overly ambitious undertaking. So many more sides of the discussion remain, with future prospects for the industry and potential debates and arguments. But the end is here, and it is time to move on. Once again, sounds just like college!
Posted by Jim Lyons at 9:08 AM No comments:

Thanks Adventures in Office Imaging!

Thanks to @DubiousMonk!
Posted by Jim Lyons at 2:12 PM No comments: