[June 29, 2011] These days we are accustomed to accepting that definitions are changing—once familiar, comfortable terms that evoked physical objects, like “books” and “magazines,” now have a much more fluid meaning. Huge and growing categories like ebooks and iPad-based ezines have taught us that these terms are more likely to be thought of as virtual receptacles of words and images, which may or may not ever take a physical hard copy form. And of course the “may not ever” part of the equation seems to be winning the day, more all the time. 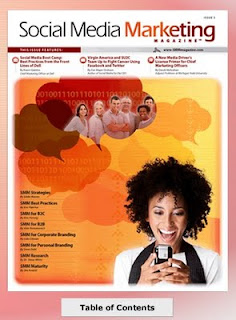 However, sometimes the trend is reversed, and when I hear about one of these “exceptions,” I like to explore the why’s and why not’s behind the potential paradox. In May, I had such a familiar moment when I saw a reference to a video interview with Kent Huffman (on Twitter at @KentHuffman), who serves as co-publisher at Social Media Marketing Magazine in addition to his “day job” as chief marketing officer (CMO) at BearCom Wireless, in Dallas. Before even viewing the video, the text summary on Splash Media’s SplashCast, hosted by Renay San Miguel, really got my attention: “It started with new media and Twitter. It will end with the publication of an old-media magazine.” 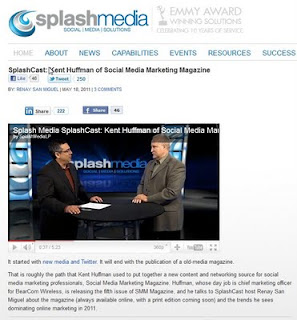 I first became aware of Huffman prior to his launch of the magazine when I received an e-mail from him in July 2009 that asked my permission to be placed on his list of “top marketing professors on Twitter,” which was posted on his “Systemic Marketing” Web site, a precursor to the current SMMmagazine.comhttp://www.smmmagazine.com. Shortly before contacting me, Huffman had started this list by identifying marketing professors on Twitter and ranking them based on their number of followers. (Huffman also compiles lists of Twitter-ensconced authors of marketing-related books and his fellow CMO’s who tweet.) I was pleased and flattered to be number 17 (out of about 30) on the first list on which I appeared (based on about 500 followers at the time). The lists (along with overall Twitter participation, of course) have expanded greatly since then, and while I remain on the list of marketing professors, I am now grateful to cling to a spot near 50 (with my 2,000+ followers), out of the 100 or so marketing professors worldwide who tweet at a certain minimum threshold (click here for the most recent list).
Huffman’s publication, Social Media Marketing Magazine (on Twitter at @SMMMagazine), launched earlier this year (with co-publisher Chuck Martin, @chuckmartin1) as an online-only publication and covers the use of social media—Facebook, Foursquare, LinkedIn, Twitter, and YouTube, for example—in the broad field of marketing and their ever-growing importance in a myriad of marketing applications. As far as the magazine content itself, the members of those aforementioned lists provide great sources for contributors of material, and in addition to more traditional magazine articles, a series of guest blog posts are added at the clip of about two per week (and including one so far by yours truly). 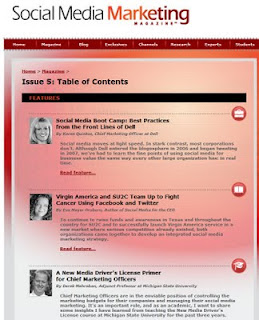 But despite content and format that lend themselves to the online-only world, Huffman sees print versions of SMM Magazine developing in the near future. We recently talked to Huffman to get some insight on this move into print, which brought to mind other recent Observations columns on counter-trends such as The Printed Blog (see “The Ultimate Countertrend”http://jimlyonsobservations.blogspot.com/2009/04/observations-ultimate-countertrendthe.html).
Huffman admits that printed magazines seem to constitute, in his words, an “old school” approach, especially in today’s fast-changing world of social media, and notes, “The material in the magazine would seem to be changing too often to consider doing in print form. Actually, though, print offers some unique value to our readers, and the solution is ‘in the middle’ somewhere.” Huffman originally set up his online magazine so that readers could print it themselves, at first only in HTML and then as a PDF, but he did not rule out actually going to a print version.
With SMM Magazine now in its fifth issue, Huffman comments, “Starting with our third issue, we had more and more questions about the magazine being printed. This is especially true with international markets. We are now in discussions with three different organizations--one in Europe, one in India, and one in South America--to potentially produce special issues for social media events in those regions in late 2011 and early 2012. They will be customized to the needs of those markets and will be published in the appropriate languages.”  When asked about longer term plans, Huffman responded, “We want to do special editions, industry-specific, for example, that will be made available in print form.”
As a bit of an aside, but offered as a comfort to readers who have tried Twitter, but still have their questions about it. What about the view from close-up, to one of the masters of Social Media Marketing? Huffman, like many of us, finds Twitter to have its frustrations, but also an allure that makes it impossible to ignore. “With Twitter, there really is just too much information, and it can be overwhelming. But on the other hand, Twitter is so valuable that it's worth the effort that's required to dig through the pile to find those important nuggets of information.” I concur!
We opened with a mention of our dynamic times and how definitions have become very fluid, and this column takes a look at magazines, but with all the ebooks and self-publishing these days, just what is a book? According to Huffman, the keeper of top marketing book authors on Twitter, “To make it on the ‘Top Marketing Authors on Twitter’ list means they have at least one book that has passed the ‘Amazon hurdle,’ . In other words, at least one of their books is available on Amazon.com.”
I like that definition, and I like thinking about having magazines in print, at least some of the time. In a fast-changing and tumultuous world, it is indeed nice to have some things back as part of the physical world.
Posted by Jim Lyons at 9:12 AM No comments: