In last month’s Observations column (see “Observations: Memorable Hard Copy Advertising Taglines—Part One”), I explored some printer industry taglines, after being inspired by an article in Forbes magazine on the “25 greatest advertising taglines.” The list was the result of voting by a group of corporate CMOs, including Xerox’s Krista Carone, who shared further thoughts about some of her company’s greatest (and longest lasting) advertising achievements. The column just did not seem to offer enough space to go beyond Xerox, so in this second part of my “tagline” observations, I look at some advertising experiences with HP and our industry at large.

HP’s “Set Your Lasers On Stun” and Dalmatians

HP's Garage is perhaps the most enduring symbol of the "original" Silcon Valley company.
HP’s LaserJet celebrated its 25th anniversary last year (see, “Observations: 25 years of the LaserJet”) and has certainly earned a role in the “product Hall of Fame,” for the printer industry and for products and marketing in general. But what about advertising? Some long-time HP employees recall an early ad, put together with Microsoft, touting the crisp, clean laser-printed copy available by combining the mid-1980 wonders of Microsoft Word (pre-Windows) with the new HP LaserJet. The ad carried the tagline, “Set your lasers on stun,” and while that line did not endure, it was a favorite with Star Trek fans. (I admit to not being a Trekkie, so I took a few years to make the association to one of Captain James Kirk’s favorite lines, “Set your phasers on stun.”)
And it was just a few years later, with the advent of new LaserJet models around the beginning of the 1990’s, when HP seemingly struck gold with the “Dalmatians” theme to advertise its new LaserJet printers. The theme was a natural, with the lovable black-and-white-spotted dogs featured in print and television ads associated with the latest and greatest monochrome-only printers of the day.

As last month’s interview with Xerox’s Carone pointed out, there are “taglines” per se, and then there are other advertising-industry descriptors for other themes. For example, Xerox’s successful “Document Company” phrase was never a tagline but a “signature statement.” So at the risk of over-simplifying, how did these two HP themes size up? While they are warmly remembered by insiders, neither has stood the test of time in the minds of the public, as HP continues to roll out new themes and taglines on a regular basis—see, for example, this year’s “Let’s Do Amazing” effort (see illustration below).Carone’s wisdom on what makes for “great” or at least memorable taglines included “an ability to transcend generations and markets.” She explained that they tend to strike a societal chord, which in turn, gives them long-term staying power and relevance. As mentioned, the Star Trek-themed “stun” ads were not meant to transcend generations but were quite focused on a techy (and trekkie) early-adopter segment, very important in the early days of a new product. But HP rolled out the Dalmatian theme to appeal to a much broader and more mainstream audience, five years following the first LaserJet printers, and the firm may have missed the opportunity for that theme to live on longer than it did. 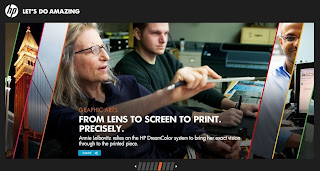 Branding experts Lynn Parker and F. Joseph LePla, in their 2002 book “Integrated Branding,” discuss the importance of “hanging in there” with brand-related motifs and images. They cite HP’s Dalmatians campaign as a good example of not following their advice that “associations must be used for the life of the brand,” even recalling an instance that brought this example literally very close to home for me. Parker and LePla write, “Local schoolchildren in Boise, Idaho, were asked to do advertisements for Hewlett-Packard’s LaserJet printers as a school project. Even though it had been several years since HP’s LaserJet brand had featured Dalmatian dogs in its advertising campaign, most of the kids drew Dalmatians in their ads. Dalmatians had obviously become a valuable association for HP that implied professional-quality printing. However, that value was never leveraged as a lasting part of the customer experience.” While the authors’ observation sheds light on the importance of patience and consistency in marketing, does it also, give us possible insight into where HP was getting its ad ideas. But surely those school kids were not really creating the ads … were they? 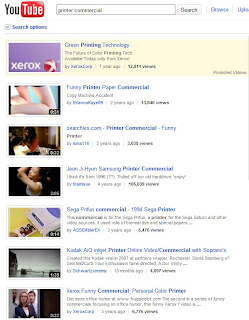 Integrated campaigns aside, the Forbes piece on best taglines highlighted memorable TV commercials, and as we are trying to recollect and/or document the memorable ones from our industry, why not query that repository of seemingly all things video, YouTube? My first search, for “Dalmatian commercial” yields a selection of ads, mostly for, you guessed it, Budweiser and Miller beer spots, with nary an HP entry in sight. I then tried a more generic search by simply entering “printer commercial” into YouTube’s search field, and came up with some interesting (if not exactly inspiring) choices. I will leave it to my readers to sample some of the clips on their own, in the privacy of their own cubicles or homes (yes, some of the examples are a bit risqué), but suffice it to say that the available evidence leads one to conclude the printer industry is still probably searching for its first true “killer ad!”
Posted by Jim Lyons at 9:43 AM 4 comments:

Check out my musings about ink and toner in commercial and production environments. Thanks Denise Kapel and Katherine O'Brien!
Posted by Jim Lyons at 10:04 AM 6 comments: