Last month, I reported on a very exciting development with our industry leader (and my former employer), Hewlett Packard, and their development of a “Print Channel” as part of the IFTTT web-based service. IFTTT stands for “If This Then That” and is considered a key Internet of Things (IOT) solution, so much so that HP’s announcement of the initiative (via blog post rather than press release – so 2015!) included IOT in the headline.


What I didn’t include last month was some hands-on recipe work. (Recipes, as Wikipedia states, being the “chains of simple conditional statements…which are triggered based on changes to other web services such as Gmail, Facebook, Instagram, and Craigslist.” https://en.wikipedia.org/wiki/IFTTT) Choosing from the multitude of existing recipes, registered IFTTT users can activate them as is, customize existing recipes, or create them from scratch – just like real recipes.

Bring on the hands-on!

Leaving out the IOT and other strategy for now, let’s bring on the hands-on! As my readers may recognize, I seem to have been born with an early-adopter gene. I don’t know how else to explain my love of experimenting with new things, even if it isn’t always the smoothest of roads! Of course, with so many new gadgets and solutions out there, I have to be selective, but IFTTT had first captured my attention a year ago, so I was even more engaged when HP added printing to the mix (via HP’s “Print Channel” – channels being the “basic building blocks of IFTTT”, again per Wikipedia.) Currently, HP has a number of recipes available (see illustration, top), with the capability to construct your own, as well.

As mentioned, I already have a background in using IFTTT recipes on a daily basis, employing a small selection which fit nicely into my personal workflow. The screenshot below show three I found early on in my quest – moving favorited Tweets to Evernote, converting Instagram posts to Tweets, and simply emailing a recommended IFTTT recipe my way every morning. Each has been “run” hundreds of tim
So looking at the print-channel options available, I was quite comfortable with quickly trying out the Instagram-to-print recipe, which prints to my designated eprint-enabled HP Printer when posted with an included #print hashtag. So far, the recipe worked fine in terms of “running” but the prints were in a rectangular format, not the Instagram trademark square image. HP is working on this, advising that it is IFTTT which “doesn’t currently support square photos, but HP is researching how to make this possible (and to print captions as they appear in Instagram)”, according to a spokesperson. From a user benefit perspective, I really don’t want ALL my Instagram posts printed, but selected ones I surely do, and with the #print hashtag I have that control. Printing and collecting all my “Waterlogue” posts as prints (see example below), for example, has been a goal for some time, and while I need to go back to print my “backlog”, I could start knocking the new ones off in real time with this recipe and the right printer, right media, and right format, once that is corrected.

Do-It-Yourself and My “Sweet Spot” Recipes

Taking the next step in recipes, I went to the building blocks to build one all my own, and noticed the “Blogger” channel, the Google platform I have using for Jim LyonsObservations for nearly ten years. So in literally a handful of minutes, I had cooked up (sorry) a “print new post on your blog” recipe. When I tried it out with a new post, it also had some formatting issues – which I will be working on. But the ability to put together the blocks and have it running in virtually no time impressed me! It will be nice to have a properly formatted collection of my blog posts, again as they are published and not in some major batch print job.

And thinking about a bigger payoffs in my time and productivity, I thought at length about when I ALWAYS want a hardcopy, and it is usually at the last minute, when I am also thinking about a million other things. That would be my TripIt itineraries. Whether for work or pleasure, every trip I have taken, by land, sea or air, has been on TripIt for almost as long as I can remember, and I always stress about remembering to go online and take the steps necessary to print out one or several copies. Having a “day before” setting to automatically print my itinerary and have it waiting for me in the printer’s out-tray is my next IFTTT recipe objective, so stay tuned. I have already identified a “Mint report to Print” recipe I am considering modifying.

The next exciting thing

In late May, 2015, when HP announced its quarterly earnings for one of the last times as the company is currently defined, pre-split, CEO Meg Whitman addressed the future. Looking ahead to PCs and Printers making up the HP Inc. portion of the split, Whitman offered, “At  HP Inc., we will continue engineering multi-OS devices and immersive computing experiences for business and consumer, and ink and laser-based solutions that provide a faster, more affordable, exciting way to print, manage and deliver content, all while continuing to invest in strategic areas like 3D Printing.” (See http://h30261.www3.hp.com/~/media/Files/H/HP-IR/documents/results/2015/transcript/q2-2015-results-transcript20150522.pdf.) As I heard this, I thought, at least I know what the “exciting” is – even with those inevitable bumps in the road!

On to Part Three

I promised when completing my April Observations that I would come back in Part Two on the topic and discuss, among other things, the “Hyper-Integration that HP included in their original blog post. Well, having covered details and hands-on experiences (and leaving a few) with a number of IFTTT recipes, it looks like that will have to be in Part Three. With HP Discover and its accompanying multi-day Analyst Briefing in Las Vegas coming soon, I should have ample opportunity to probe the strategic depths (along implementation details) with key HP execs, and then report back here with my summary. And now we will see if I have my automated printing of TripIt itineraries working by then, too.
Posted by Jim Lyons at 7:04 AM No comments: 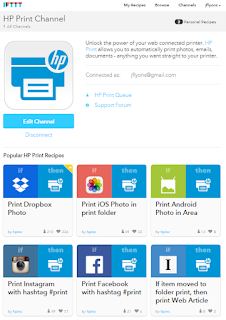 I am in the final stages of completing a very fun and interesting Observations - following up from last month. (See http://jimlyonsobservations.blogspot.com/2015/04/april-observations-printers-and.html.)

This is just a short teaser and a test - stay tuned for the full May 2015 Observations, at the end of the week!
Posted by Jim Lyons at 10:03 AM No comments: