[February 24, 2011] Since my November 2010 Observations column on ACTPrinter (“All That Glitters...”) and January 2011 Observations column on paper.li (“Paper as a Metaphor”), I have been tempted to fall back on the old saw, “If it looks like a duck, quacks like a duck...” and conclude that these products confirm the importance of printing in our new world, but this is not the case! In fact, these two solutions with print or paper in their names do not actually mean paper or printing in any material sense at all. In the same vein, I offer the conclusion of my three-part series with this month’s feature attraction, Instapaper, the very popular viewing app for iPhone/iPad/iPod Touch (Apple iOS) and other platforms, including Web browsers and Amazon Kindles.


At first glance, this popular app (featured in much press coverage, including The Wall Street Journal and the New York Times) with the prominent inclusion of the word “paper” in its name, makes a long-time printer industry member like me take quick notice. But while the $5 version (a free one is also available), named by the Times’ Damon Darlin as “One of the best values in the Apple App Store” in December 2010 and by fellow Times writer Bob Tedeschi as one of “Ten Apps That Make Magic on Your iPad,” also in December, meets user needs in virtually the same fashion as physically printing and then reading the content, Instapaper precludes the trip to the printer and the corresponding depletion of paper and toner or ink.

The description of Instapaper available from the app’s listing on the Apple iTunes App Store has a familiar ring to it: “Great for long articles and blog posts that you find during the day and would like to read, but don’t have the time when you find them. Save with Instapaper, then read later, when you’re commuting, in a meeting, or waiting in line.” This description could have just as easily been ascribed to HP’s original Web Printsmart or Canon’s WebRecord (and was, just not in so many words), back in the days when information availability was exploding via the Web and e-mail, and printer industry types were assured that content must be printed on paper before being consumed, at least in a large number of cases. Apparently, in the decade or more since those first Web-printing attempts (see “Printing from the Web – Are we reaching the end point?”), the physical act of printing has more often been replaced by the virtual equivalent.

The Instapaper App Store description of the application’s core features also states, “Saves most webpages as text only, stripping away the full-sized layout to optimize for the iPhone and iPad screens; distraction-free reading environment gets out of your way so you can focus on the content; everything you download is then available off-line so you can read whatever you want even on airplanes or on Wi-Fi only devices away from Internet connections.” Substitute “letter-sized and A4 paper” for “iPhone and iPad screens” in that feature list and you would have a description of the Web-tuned printing apps of recent history.

So just as the electronic viewing of photos has become more customary, via social media platforms like Facebook, photo sites like Flickr, and even digital photo frames, electronic document viewing continues its march toward popularity and pervasiveness. These “substitutes,” as economists label them, are replacing printed photos and documents, leaving our industry with the hope that net growth in prints coming from the total number of photos taken and documents distributed increases faster than the decline in printed content.

Plays Well with Others

With respect to inter-application versatility (i.e. send-to-Instapaper capability), the App Store description notes that “sending to Instapaper is supported by over 135 other iPhone and iPad apps! You can even send long emails to Instapaper.” So within the iOS environment, many apps “get along” and can provide source content to the Instapaper viewer. This behavior is different than that of those previously-mentioned browser-based print apps and reflects the app-driven (as opposed to browser-driven) world of today’s mobile platforms. (As a note, Instapaper, according to Darlin’s Times article, is holding back from doing Android versions to avoid further complexity for the one-person company.) 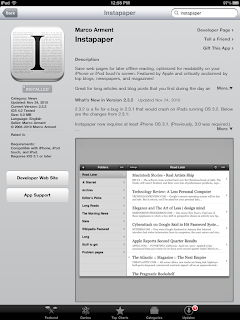 Instapaper’s one person is the charismatic Marco Arment, a developer of social media platform Tumblr and an influential force in the app universe. When initially contacted, Arment was responsive but concerned on the fit of Instapaper in an article for a printer-industry publication. Despite his busy schedule (while we were researching this piece, Arment was an outspoken industry voice on the newly-announced enforcement of Apple’s in-app purchase (IAP) program), Arment was friendly enough but offered, “I’d be happy to do a brief interview, but are you sure Instapaper is relevant to the article? It doesn’t really have anything to do with physical paper or printing.”

But, a “print” option displayed to logged-in users on Instapaper’s Web site (and described pre-login, see screenshots below) offers a glimmer of hope. 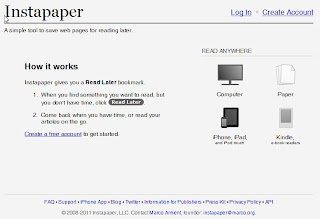 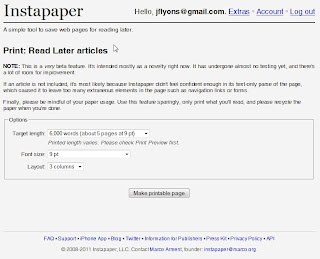 While couched with cautions, this capability became the subject our first-ever Twitter interview (see below) when we tweeted to Arment, “Will the print function on Instapaper web site evolve beyond ‘very beta?’ ” Arment tweeted back almost immediately, “Probably not. Hardly anyone ever uses it. But I love printing off a few pages before air travel for taxi, takeoff, and landing.” 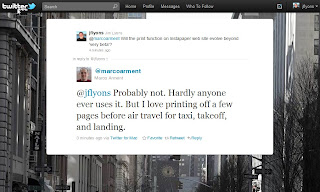 This twitter exchange just goes to show that like the “everything will be printed” assumptions of a more than a decade ago, today’s “nothing will be printed” assertions will not come to pass—the world does not work like that. Finding the right time, place, and applications for each medium is the important issue that will let creative forces prevail in our industry and others.