The Hard Copy Observer, January 2011
Observations: Paper as a Metaphor - exploring Tweet-based paper.li
by Jim Lyons
[January 27, 2011] As mentioned in my November column (see “Observations: All That Glitters…”), I am commonly drawn to learning more about innovative solutions in the social media and mobile apps space that have “paper” or “print” in their names. I explored the iPhone/iPad app ACTPrinter and learned that its “printing” capability was really more about the ability to create simple PDF-like versions of materials that would normally be reduced to hard copy form (think tickets, receipts, etc.) but could be transferred and displayed on mobile device screens, thus avoiding hard copy usage altogether. ACTPrinter’s founder learned that his app had gone from a tool used for airline and train tickets to one that could “mobile-ize” other documents, like articles and reports, for “consumption” on iPhones, iPod Touches, and iPads.
I promised then to explore paper.li, a Twitter-based solution I discovered that really is using “paper” in a metaphorical sense. Nonetheless, in the same vein as the viewing-based magazine-equivalents I have covered in the past (for example, see “From the Magazine Rack and What a Difference a Year Makes!”), paper.li offers some great insight into where printing opportunities (or at least printer industry opportunities) might exist, more like my July 2009 column (see “Print Those Tweets”http://jimlyonsobservations.blogspot.com/2009/04/observations-ultimate-countertrendthe.html), where I pointed out that it was possible to print tweets and that many people were actually doing just that.
So what is paper.li, and why should you care? Like Flipboard (see the aforementioned “Magazine Rack” post), paper.li is a program that organizes your incoming Twitter feed into a format that resembles traditional media (the front page of a newspaper in the case of paper.li) but also takes advantage of the interactivity of hyperlinks and multimedia. Note that while I continue to concentrate on the Twitter aspect of paper.li, the software is capable of organizing Twitter and Facebook streams; paper.li simply suits my use of the two platforms as a Twitter-only solution.
The creator of paper.li’s is SmallRivers, a Lausanne, Switzerland-based firm, and the company’s Web site describes its advertising-supported service as follows, “paper.li organizes links shared on Twitter and Facebook into an easy to read newspaper-style format. A great way to discover content that matters to you—even if you are not connected 24/7!” The more I learned about paper.li, I realized that the “paper” in the solution’s name stood for “newspaper” formatting (and that the “.li” suffix roughly translates to “personalized”). However, paper.li seemed to produce a format that may indeed still lend itself to printing, not unlike “The Printed Blog” (see “Ultimate Countertrend, The Printed Blog”). The images at *** are examples of paper.li’s daily output.
When asked about the fit between paper.li and actual, physical printing, Iskander Pols, co-founder of SmallRivers, commented, “Hard copy was not part of the original design. We did have some users show interest in such an option though. While it may become an option at some time, you have to realize that paper.li is particularly well suited to the Web, in so far that we facilitate content discovery, pushing readers to the original content wherever it is on the Web, i.e. the actual reading of articles is done on the source Web site, not so much on paper.li.” Regarding that future hard copy option, Pols added, “We will be looking into creating PDF-friendly versions of papers. Unfortunately, no timing for such a feature is available.” 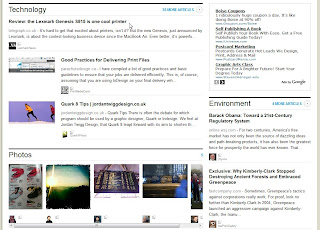 Even @JFLYONS made this paper.li edition - by VitalyG - though below the fold
So perhaps a dead end, and another example of retaining the “paper” moniker as a metaphorical and historical artifact rather than a physical description, much like the academic “papers” I have written about several times in the past that rarely if ever are converted to hard copy form. But as social media becomes more pervasive across industries as an outbound communications tool for marketers and an inbound source for keeping abreast of the world and the industry, paper.li may become very important. 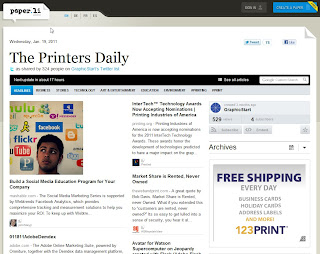 The Printers Daily paper.li by @graphicstart from January 19 2011
As seen from the sample paper.li images, setting up and building off your investment in your Twitter (and perhaps Facebook) following can be a great way to monitor and stay current on developing trends in the industry. There is also the serendipity aspect to it—the two examples I show here are owned by two tweeters who happen to follow me, meaning that when one of my tweets shows up on their “front page,” I get notified in the form of a link to access their papers. Therefore, without even setting up a paper.li of my own, I get the benefit, a network effect of sorts, of being followed by virtue of tweeting enough material of interest to show up in my colleagues’ summaries. (Editor’s note: Jim has since started his own paper, which can be found at http://paper.li/jflyons.)
In summary, paper.li, whether truly a “paper” in physical form or not, should be a valuable tool for industry members to recognize and begin to use regularly. The year is 2011 after all—time to be up on the ever-changing world of social media. 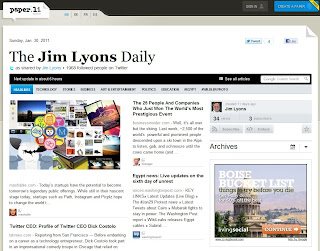