One would have to be living under a rock to not have been exposed to the Twitter phenomenon this year. Some of the newsworthy mentions that easily come to mind include the (distracted) audience members’ tweets, including those of many members of the U.S. Congress, posted during the new U.S. President’s first major speech; the role of Twitter in breaking news developments on “the Miracle on the Hudson” plane landing; tweets during the sudden and sweeping Swine Flu outbreak in April; and more recently, Twitter's role in June's Iranian presidential election and the controversy following it and the news around the tragic death of entertainment icon Michael Jackson. 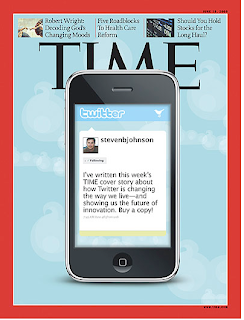 I personally have been a Twitter account holder (@jflyons) for about a year and a half. Not exactly an early adopter relative to Twitter’s origin in 2006, but early enough. But truth be told, from that point of curious registration early last year and a handful of "tweets" to follow, I really only got serious about Twitter nearly a year later, about the same time as the first of those previously mentioned events in 2009. In fact, a blog post of mine, "Do we need Printer Industry Tweets?" in February of this year was met with a polite chorus of readers commenting back, basically, "Hey clueless, we already have them!" I guess my excuse was, as author Steven Johnson points out in the first line of his Time cover story, "The one thing you can say for certain about Twitter is that it makes a terrible first impression."

But I have come to appreciate, and even at times become consumed by, the charms of Twitter and its bevy of tweeters. Agreeing with Johnson’s assessment, again, I find it an invaluable resource for both finding links to interesting articles and other online content, common and obscure. It is also a unique tool, as compared to the longer-cycle blogs and other online (more traditional) media, for both digesting and sharing quick reactions to real-time conference activities and the like. By monitoring Twitter, I felt a part of May's "All Things Digital" this year, though I missed the actual conference. I also enjoyed reading others’ views in the “tweet-streams” from this year's Demo Conference in March, and also participating with my own, and most recently, keeping abreast of HP’s (NYSE HPQ) San Francisco news event introducing the firm’s new Web-connected printer (see "HP Reveals").

Future issues of this column may delve into the depths of the question, “Why print tweets?” but for now, suffice it to say that in the case of using Twitter to pass the word via quick link sharing, the need for printing is not so obvious. But in the case of collecting ideas and opinions from many or a few (or one) authors, a hard copy treatment may make a lot of sense.

While probing around a few months ago to find out if anyone was doing anything about reducing (preserving?) tweets to hard copy form, I found an interesting compilation of tweets into a form of personalized diary. The whole story can be foregone, but the blog post, entitled "Twitter Printing," describes a devoted Twitter following a multi-step process to end up with two years of his entries, entitled, simply enough, "My Life in Tweets."

But like in any fast-moving technology field, more has happened since. Most prominent on my radar lately is the Web site, www.printyourtwitter.com [www.printyourtweets.com works identically], a Web service that allows the reduction of Twitter messages, either your own or others, based on Twitter identity or keyword (or hashtag), into a form that allows for easy printing, or if not actual printing at least saving in a print-friendly form, like PDF. 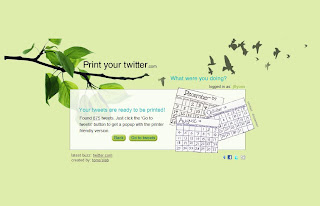 While pretty bare bones, I found the Web-based service a model of simplicity. In addition to using my own tweets for an example, I entered the hash code #hpreveal, which was used for the aforementioned Twitter-oriented HP announcement. The search quickly came up with more than 877 individual Tweets and formatted them in a chronological log that spans 75 letter-sized pages, which I saved as a PDF for possible printing later.

I had a chance to interview TomsLab’s Thomas Ummels, creator of PrintYourTweets, whose entrepreneurial, creative spirit shows what can be done with the latest opportunities that present themselves, like Twitter (see "Behind the Scenes").

PrintyourTwitter is an exciting development in the world of printing tweets and the fit between the hard copy world and Twitter. Ummels is looking for sponsors for the site, which I think would be a great idea for one or more printing industry players out there who want to show how Twitter-friendly they are! Next month, I will explore more about Twitter and its document-management capabilities, which includes some old (and new) friends in the industry.
Posted by Jim Lyons at 11:37 AM

Coordinator of the Printernet Project said...

My focus is high school education. Given the 140 character restraint and how natural it is for high school kids, especially at the bottom of the pyramid, to SMS, tweet, and blablabla, I bet that printed tweets could be a great help in HS Ed.

Consider a teacher twittering to a class. the # could be #Class XYZ. Then periodically printing to the tweets to discuss in class.

Complex subjects broken into a 140 character bite sized bites (bytes).
Then in print for a more considered response.