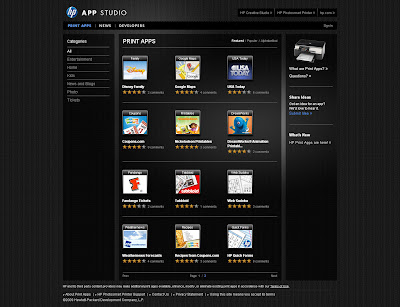 A month ago I posted about the opening of HP's Printer App store (see "Printer Apps Store Launches"), and also added a first-look at the selection of apps available (see "Day One -- HP Ushers in New Era of Consumer Printing with Full Suite of Print Solutions").

Microsoft made news this week with the opening of their app store (see "Windows mobile app store, My Phone service officially opening"), albeit unlike HP and the same as the king-of-the-hill Apple iPhone app store, their effort is dedicated to phones and mobile devices. With Apple's number of apps recently reaching close to six figures, with over two billion downloads (see "85,500 iPhone apps, 2 billion downloads") it's easy to see Microsoft's nascent effort, with over 100 apps, as a reverse of the Windows/Mac days in terms of the overwhelming ratio of applications. But, even in a totally different category, how is the HP Print Apps store measuring up?

As compared to a month ago, the HP Print Apps section of the HP Creative Studio is now featuring 15 print apps, up from 14 last month (see Screen Shots above). The most popular seems to be the app from Coupons.com, with a total of nine user comments to date, average a 4+ star rating.

While web printers versus mobile phones may be an apples-to-oranges comparison (pun acknowledged but not intended), it would seem HP has a long way to go to be in the company of Microsoft apps store (acknowledged as about the sixth entry in the race), let alone the leader.
Posted by Jim Lyons at 11:32 AM

Your writing good and I congratulate you know, in the course blog, visit my blog