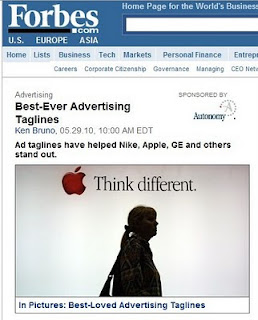 I have been teaching an MBA-level consumer behavior class recently, and that may be why I gravitated so strongly to a recent online article about favorite advertising taglines. The article in Forbes was based on a survey that asked corporate chief marketing officers (CMOs) to identify the most popular advertising taglines of all time, and here is a quick question for you: What do “Think different,” “Just do it,” “A diamond is forever,” and “We try harder” all have in common? Along with 21 other entries in the “Top 25,” they have little or nothing to do with the printer industry!

The Observer [where this column also appears] does not shy away from reporting and commenting on printing and imaging companies’ advertising, including coverage of recent campaigns by Kodak, Lexmark, and HP, but do any of their taglines, i.e. “Print and Prosper,” “Outsmart Evil Ink,” or “Let’s Do Amazing,” resonate in the old brain in the same way as, “You deserve a break today,” “Got milk?” or “When you care enough to send the very best?”

Among the CMO's who participated in the survey were two from our industry, including Xerox's Christa Carone, who shared some further insights for this column—about taglines generally and some industry specifics. In addition to being on the voting panel, Carone, who has been the Xerox CMO since 2008 and was recently appointed a company vice president (May 2010), is quoted in the Forbes piece referencing Verizon’s “Can you hear me now” tagline as used recently in conversation by her 6-year-old daughter. In a follow-up conversation, Carone helped shed some light on what it took to make the list and shared a few thoughts on why the printer industry was shut out, at least from this particular list of 25. “While the process did not include a lot of science and relied more on ‘gut calls’,” Carone told us, “The favorite taglines do have in common an ability to transcend generations and markets. They tend to strike a societal chord, which in turn, gives them long-term staying power and relevance.”

Carone noted that business-to-business (B2B) campaigns, where many if not most printing and imaging ads are aimed, are typically much more targeted than mass-market, consumer-oriented advertising, so they are almost by definition not going to be as memorable, at least among a wide audience. She explains, “The telecom market, for example, is so broad that it’s possible to establish and form a single-line impression that lasts and permeates the consciousness of people from tweens and teens to older folks.” While B2B has its limits, she pointed to Xerox’s recent campaign that features the tagline, “Ready for Real Business,” and its role in welcoming the integration of recently acquired Affiliated Computer Services, Inc. (ACS) and priming the market for business services that Xerox is now ready to play on a broader scale.

This re-positioning of Xerox, from a more print- and copy-centric version of services to a more generalized offering for which ACS is known, recalls an earlier time when another effort by Xerox to transform its corporate identity comes to mind. “The Document Company” was a Xerox “signature statement” (not to be confused with a tagline), and though the phrase has been out of official usage for about ten years, it still endures. A simple but powerful slogan, “[the Document Company] was helpful in building out the services business for Xerox in the first place, that it was not all about the paper document,” according to Carone. Coming from the copier company that decades earlier saw its company name became so synonymous with its product/service that it became a verb (“Xerox-ing” a page, à la “Googling” a subject), “The Document Company” served quite effectively to help position the firm in a new light. 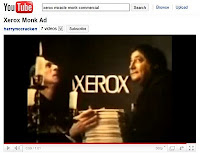 In terms of originally defining Xerox as the copier company and proving a tagline’s staying power, however, the endurance of the Xerox monk and the “It’s a miracle” television advertising spot is tough to beat. Although not really a tagline in the strictest sense, that slogan and the original 1976 Super Bowl commercial cling to fame, primarily via the propensity for annual recaps of memorable ads from “the big game,” says Carone. Eight years before “1984” and Apple’s famous commercial for the original Macintosh, the Monk whose need to create 500 copies for his Monsignor led him to Xerox, lives on via YouTube and those once-a-year retrospectives of memorable TV ads.

With my personal background that includes many years working in HP’s LaserJet business, I fondly remember some of the campaigns of which HP employees were particularly proud. Next month, I will share my observations about those and other memorable advertising campaigns, if not taglines, from our industry.
Posted by Jim Lyons at 9:32 AM

Anonymous said...
This comment has been removed by a blog administrator.
3:21 AM

Anonymous said...
This comment has been removed by a blog administrator.
7:20 PM

陳淳 said...
This comment has been removed by a blog administrator.
7:20 PM

Anonymous said...
This comment has been removed by a blog administrator.
3:02 AM

Anonymous said...
This comment has been removed by a blog administrator.
7:52 PM