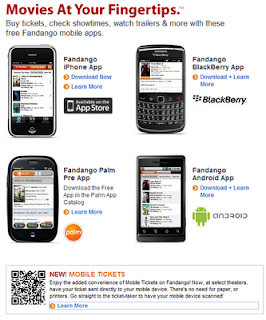 Thanks to Techcrunch on this one, with Eric Shonfeld's piece this morning (see "Fandango Begins Rolling Out Mobile Tickets That Let Moviegoers Go Paperless"), about an eight-city trial (my word, not theirs) launched by Fandango to accept movie "tickets" via images on customers' smart phones, using QR Codes. (See "January 2010 Observations" on QR Codes.) Fandango's blurb about their new capability touts "no need for paper, or printers" (see above), though of course, as Schonfeld points out, there's an infrastructure investment required (theaters need to be equipped to read the QR codes) which means universal acceptance in down the road a ways. However, Fandango's announcement does come less than nine months after their partnership with HP and their direct Web-Connect Printer (see "HP Reveals").

Read about Fandango's solution in their FAQs.
Posted by Jim Lyons at 8:18 AM