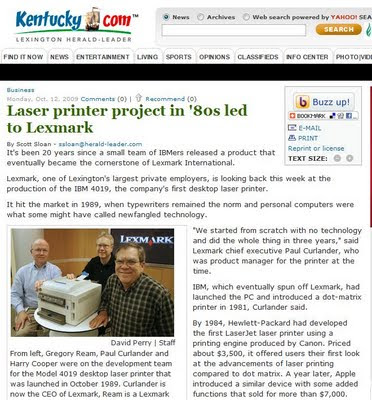 Scott Sloan at the Lexington Herald-Leader and Kentucky.com has an interesting piece saluting the IBM printer efforts centered in Lexington 20 years ago, that became stand-alone printer-maker Lexmark (NYSE LXK) a few years later. In "Laser printer project in '80s led to Lexmark", Sloan interviews current Lexmark and former IBMers Gregory Ream, Paul Curlander and Harry Cooper, on some of the before-and-after stories related to the introduction, on October 10, 1989, of the IBM 4019 Laser Printer. Fascinating is the focus on the industry leader HP (NYSE HPQ) and its LaserJet printer, and the improvements IBM targeted, including a product size (weight) that would be half of the HP's, and, interestingly, "correct order output", which the LaserJet didn't offer.

HP, which celebrated the 25th anniversary of the LaserJet printer earlier this year (see "HP celebrates 25th anniversary of its LaserJet printer"), remains the market leader in laser printing, with Lexmark, which split from IBM as a corporate spin-off in the early 1990's and assumed its own identity a few years afer that, continues as a major player in the category, too.
Posted by Jim Lyons at 6:32 AM