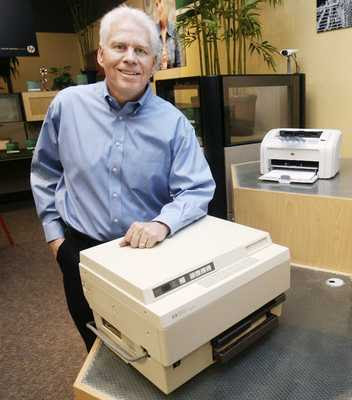 The Idaho Statesman has a nice piece today wishing HP (NYSE HPQ) and its LaserJet printer a happy anniversary -- see "HP celebrates 25th anniversary of its LaserJet printer" in this morning's print edition (as well as online, of course). In the piece by Brad Talbutt, HP Executive Von Hansen is featured, and he recalls a few of the tales from the story of the first LaserJet, 25 years ago.

I wouldn't join the printer team at HP-Boise until 1986, and was working on the storage side (also in Boise) during the momentous Spring 1984 introduction of the first LaserJet. I attended that Atlanta-based COMDEX where the printer made its first public appearance, and while I don't remember it being quite the hit of the show that Hansen recalls, it certainly did get attention. And that attention even went beyond the name ("LaserJet"), which offended certain HP purists who a) didn't like the fact there really wasn't a "jet" involved in the product (it was a name improvised from recent HP inkjet products, see "Coining the term 'LaserJet'"), and b) were really more comfortable with numbers rather than names (see "Cold, Dead Fish").

What a great 25 years, and congrats Von, HP, and LaserJet, and all those other colleagues, past and present, who've played a part!
Posted by Jim Lyons at 7:04 AM

While I mentioned in my post that I didn't remember the original LaserJet being the hit of Spring Comdex 1984, I am reminded that I was there as a disk storage marketing type, so the printer scene was off my radar. The HP LaserJet's "star was born" at that show, no doubt about it, and the product/brand went on to be one of HP's, and the world's, most successful products of all time.

Ah, yes. I remember the announcement of the LaserJet while an intern at Xerox in Los Angeles. I recall the product took off and soon we at Xerox were asking ourselves "who are those guys?" and "where the heck is Boise?"

Congrats to all the folks who played a role over the past 25 years. This dynasty is stronger than the NY Yankees.

Oh, it was definitely a hit, and a challenge to demo as we really needed to show it with an IBM PC in addition to an HP 150 touchscreen machine. Had to rent them locally in Atlanta ourselves, in fact, as the local HP folks staunchly refused to do it for us. And then there was Steve McDonald from Adobe Systems, obviously not thrilled by the smaller, if less capable, LaserJet. He kept flinging out his cool pictures on top of our cool printer. Go away, Steve. And, let's see, did we have a printer in the WordPerfect booth? Volkswriter? And did we have an off-site suite as well? That's my memory. And then there's the tale of the beautiful and intelligent model we hired to walk around and hand out print samples...