My Observations column, now into its fifth calendar year in The Hard Copy Observer, tends to carry themes bifurcated between two poles: the nostalgia of “how things used to be” and the prescient of “here is how things are heading and will be in the future.” In what I consider a really successful column, a given topic can generate some thoughts apropos to both camps, and I believe this month’s subject at least approaches that. The conversion of PC Magazine as a leading print (and printer) publication in our industry, from traditional hard copy to an online and print-it-yourself-if-you’d-like publication, is that topic. The online transition provides the fodder for looking ahead, and the subject of PC Magazine in general evokes past memories of how things in the pri 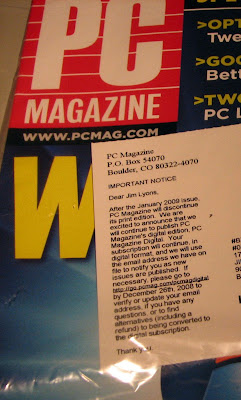 In November of 2008, the news came that the venerable publication was undergoing this radical change, and I blogged about it under the heading “PC Magazine’s all-online move.” Now that the final hard copy edition (January 2009) has appeared in my mailbox, and the insert that came packaged with the magazine, “After the January 2009 issue, PC Magazine will discontinue its print edition”, has forced me to face the finality of the decision (see image below), it seems a poignant time to look back and look forward.

At the time I wrote my blog post, I realized that what had been a mainstay traditional magazine serving a key role in the personal computer industry at large was transforming to an all-online publication. Moreover, while we had been predicting the transition from the “print and distribute” to “distribute and print” model for mainstream newspapers, books, and catalogs for the past 15 years, this switch was now happening to one of our own.

But just as HP (NYSE HPQ) printer chief Vyomesh “VJ” Joshi has been saying for the past year or two, the strategy of focusing on “printing” and not “printers” is a big step toward facing the future, which was foretold by the idea that centralized printing of information, for distribution in physical form, was a dated approach that would be replaced by electronic distribution of the same material, with consumption by readers of locally printed material. In this scheme of things, the future looks very bright for manufacturers of desktop and workgroup printers and supplies, as all those pages move from centralized commercial presses and are printed at their final destination. Of course, the big question, especially as the user generation and the material itself changes, is whether the need for printing (or appropriateness, in the case of multimedia content) still applies. In my opinion the answer is somewhere in the middle, looking forward a few years, and farther towards the consumed-but-not-printed end of the spectrum in the longer term. But time will tell…

On the nostalgic side, here’s what I wrote in my blog in November about the demise of the hard copy PC Magazine: “As a printer industry veteran, the Fall of the year brings to mind the now long-ago excitement that we in the biz felt when the PC Magazine annual Printer Issue hit our mailboxes. Which companies, and models, would warrant top-ranking ‘Editors’ Choice’ awards? And what printer would grace the cover of the issue?

“The annual edition set the standard for who was on top, and who was gaining, or falling. The magazine was written for technology and printer buyers, especially elite early adopters, but industry insiders gave great attention to its advice. In-the-know marketing and R&D types were recognized by their collections of back issues and cubicle clippings from PC Mag’s printer edition.

“Through the ‘80s and ‘90s, I was lucky enough to work for a company whose latest printer model often made the cover of this landmark issue. It was an honor we cherished, and worked for. A ‘vision statement’ for a new printer development team often included the ‘stretch goal’ of making the cover of the annual. While sales and profitability were the shareholders’ yardsticks, the ‘PC Mag Printer Issue cover’ metric was in many ways the ultimate (and not unrelated) prize. The comprehensive Fall printer edition has been gone for awhile, with the magazine’s continually excellent printer coverage spread out through the year.”

And now of course, it can be found online, to be printed as you choose to!

In reflecting back on my own words from two months back, I’m not nearly as emotional about “the good old days” as I was then, or at least that’s how it seems as I juggle trade show (CES) and industry conference (Lyra Symposium and Demo) travel schedules. I am also excited about numerous new industry developments, and I have done a little more thinking, realizing how the “democratization” of information, via the Web mostly, and the speed of the industry are more suited to a continual, year-round schedule of product launches and dissemination of information from a huge variety of sources. 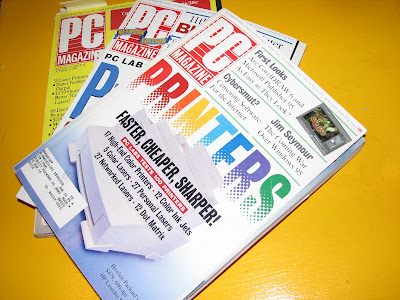 Through much of the 1980s and 1990s, the well-informed printer marketing manager could be identified by the collection of PC Magazine printer editions in his/her cubicle.
Posted by Jim Lyons at 10:54 AM

I too remember the magazine from the 80's -

So many things are changing so quickly, especially in documents, information and print...

...just need that one "killer" piece of hardware that can replace 80% of the paper medium...Kindle is a start...