August Observations -- From the Magazine Rack and What a Difference a Year Makes!

Observations: From the Magazine Rack 2010 – What a Difference a Year Makes!
by Jim Lyons 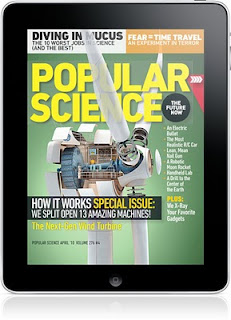 In 2010, the iPad has been huge as a platform for traditional magazines and new forms of magazine-like publications

In my Observations column just over a year ago (see “Jim Lyons Observations June 2009 – From the Magazine Rack”), I observed that Time’s Mine was an interesting, ongoing experiment with a personalized magazine. In what looked like a traditional hard-copy magazine, Mine was a response to the long-heard siren-song of personalizing content, culling articles based on subscriber profiles from a bevy of Time, Inc. publications. At the same time, I reflected back on other Observations columns, earlier in 2009, that covered the conversion of traditional hardcopy magazines such as PC Magazine to Web-based viewing/subscription sites like Zinio (www.zinio.com) and somewhat experimental projects like The Printed Blog and HP’s Tabbloid that seemed to reverse the trend back to a hard-copy orientation. It seemed as if the magazine world was facing an unprecedented level of change, and even excitement, though in the face of significant threats.

Well, one year (and two months) later, that level of change, in some ways seems trivial. What is the catalyst for the recent tumult? The April 2010 introduction of Apple's iPad is the one significant event over the past 14 months that can be linked to so much more change in the magazine world. While the iPad has set sales records and offered new ways of doing many different things, and more generally inspired new ways to think about networked and tablet computers, one of the biggest opportunities presented by the iPad (and its ultimate offspring and offshoots) may be for magazines and newspapers to change the way they reach their readers. While the book world and its transition to e-books really started earlier, with the introduction of Amazon's Kindle as a major milepost along this evolutionary path from print to electronic, the iPad can be blamed, or credited, for shaking loose the vision and potential rebirth of magazines (and potentially, but to a lesser extent, newspapers).

With the iPad launch, and in the months following, many magazines, including Popular Science, Sports Illustrated, Wired, and even People, have been formatted, and are sold, for the iPad’s distinct viewing capabilities. While the results have been praised, the business model is still yet to be worked out. For example, a single issue typically costs five dollars through the iTunes app store, and one year's subscription to the print version may be about the same, at least via many easily available promotional offers. There have been accusations that these iPad-specific magazine versions are gimmicky and destined not to last, and some industry observers, such as Techdirt’s Mike Masnick, have even compared them to the multimedia CD-ROM “revolution” of the 1990s (see “More People Recognizing That Media iPad Adaptations Feel Like CD-ROM Media”). 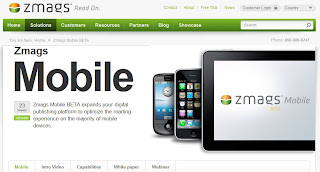 Zmags, which I covered in my May Observations column, is in beta with an iPad viewer

A look to the iTunes app store for iPad-specific apps or browsing for mobile-oriented Web pages geared for the iPad yields glimpses of some old friends. Remember Zinio (see “Jim Lyons Observations January 2009 – PC Magazine is Dead, Long Live PC Magazine”)? How about the more recently covered Zmags (see “Jim Lyons Observations May 2010 – Zmags—Another Online Viewing Alternative”)? HP’s MagCloud, (see “HP Enhances MagCloud Service, Offers ‘Blended Viewing Options’ for Magazine Readers", originally designed to help Indigo press owners (print service providers or PSPs) build volume by funneling short-run magazine print jobs to them, now has its own iPad app that offers partner magazine publishers the option of online viewing via Apple’s tablet, in addition to print-on-demand capabilities. Missing in the line-up, so far anyway, is Google’s Fast Flip (see "Jim Lyons Observations April 2010 – Google Fast Flip—More Innovation in Magazine and Newspaper Viewing”). Although this technology continues on with a mobile phone viewer, the firm has pulled back its presence on the Google News home page. Of course, the majority of these devices and apps are geared to the viewing of material prepared for print and then made available (i.e. “repurposed) for online as well. The exception is Fast Flip, which is based on viewing Web pages in a magazine style—a “flip through” format (as the name implies).

However, the biggest news on the iPad magazine front from the summer months is the launch of Flipboard (www.flipboard.com), the self-titled producer of “your personalized social magazine,” which includes Web pages and RSS feeds of your choosing (à la Google Fast Flip), but also intermingles material from your own Facebook and Twitter feeds (see image below). The excitement and rave reviews (see The Wall Street Journal’s Katie Boehret, “Your Own Digital Magazine”) have led to widespread downloads along with some start-up hiccups and threats from server issues (see “Flipboard hype crashes iPad app's servers”) and legal questions (see “Is Flipboard legal?”). 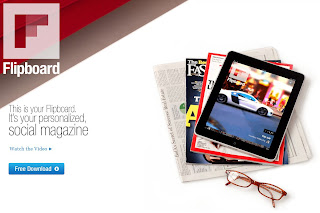 Flipboard has become an iPad sensation as "Your Personalized Social Magazine," but except for my plea for interested souls, there has not much Twitter action on "Flipboard printing"

Flipboard delivers dynamic and very personalized content and is far from the static PDF examples above and for that reason, seems like perhaps an ideal candidate for some printing as users attempt to capture a “moment in time” that conceivably combines their online worlds. So far neither Flipboard nor its user community seem to have given printing much thought, as evidenced by a search of Twitter for “Flipboard printing” that turns up only a few obscure references (see image below). After a few more months of maturation, however, we would not be surprised to see a printing need emerge, just as with the iPad at large. (See bottom of post for additional links related to Flipboard.) 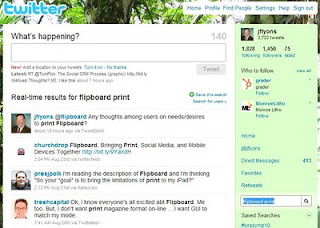 The Return of the Ultimate Countertrend?

Clearly the world is changing quickly around this space, so stay tuned. But there are some comforting moments of stability … and even nostalgia. Earlier this week, I received an e-mail from an old friend I met while covering this “beat,” Joshua Karp of spring 2009’s first darling (and then defunct) The Printed Blog (see "Jim Lyons Observation, April 2009 – Ultimate Countertrend—The Printed Blog”). Karp’s e-mail announced … drumroll please ... the return of The Printed Blog! With these words, Karp announced a subscription-based, paid model, with the following description that will no doubt warm the hearts of at least some of my readers.

I wanted to let you know that I've restarted The Printed Blog. We re-launched because there is no publication that brings you the best of the web, curated by people you follow and respect, in a beautiful print format every week - and there needs to be. Sometimes, it's just nice to sit down - on the train, or a couch, or at a café, and to read something on paper. Not everything is always better online, by default. We believe that the web is best suited for cutting and pasting and searching and linking and transacting - and print is best for actually CONSUMING information, and, ironically, the more content is pushed online, the more important print is going to become.

As I love to preach to my MBA marketing students: segments, segments, segments… We learn over time that as fast as things change, different users have different needs, at different times, and for different purposes. Printing and viewing have already coexisted for generations (remember 35mm slides?), and will no doubt continue their jostling for some time to come. Be sure to watch this space for further developments.

Other Links for Flipboard (and iPad magazine) commentary