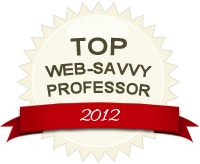 I received a nice surprise via email today, from the CEO of Best Online Universities. In the email, Scott Hawksworth informed me that I had been named to his organization's list of 100 Web-Savvy Professors in 2012. And from the looks of the list, I am in very good company. So I say, "thanks".

While I devote most of this blog to my printing/imaging and more general tech interests, I am indulging myself with this from the higher ed portion of my world, but after all, that's pretty tech-driven as well. I have been fortunate enough to find myself on several lists like this since beginning the teaching part of my second career in 2006, and these higher-ed-oriented honors seem to be generally more prevalent than anything equivalent in the world of printer industry writer/analysts. Or maybe I just think that, because... ;>)=
Posted by Jim Lyons at 1:05 PM